Weʼve raised £380 to fund & to ensure that the Memorial will happen for the Occupation Generation of Channel Isles.Generosity helps the Campaign.

We need funds to promote Occupation Remembrance Day this June 28th 2022. Nobody is doing what we are doing for those who faced the Occupation of Channel Islands during WW2 and horror of Occupation by Nazis. It's challenging to keep this campaign rolling!

Is Donation short fall - but please donate what you can afford, to secure our future. We ask you, humbly to donate. We need donations for leaflets to stamps & far more & lot planned in 2022. We rely on public donations to keep going and possibly a unique Battle. Campaign was set up South Family in 2018 - and Kev South is the Campaign Lead.

These people are, for the most part, unknown or forgotten. They, also, deserve to be remembered. Formally. They faced - Starvation - Deportations - Hunger and what happened still remains " under the Carpet in British History. "We need to fund the Campaign and deliver a public event in 2021/22 to promote the Campaign and - Leaflets - Website - Correspondence - The Whole running of the public campaign for all those who endured so much. Also pays for press Campaign Ads. Jersey Occupation Civilian Campaign has moved to the second phase of the Campaign to deliver a very important Public Event . 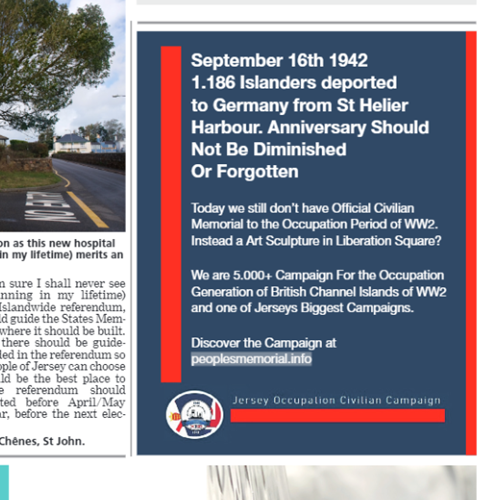 We need to engage with the public and politicians and with the UK politicians and public. Help this Campaign deliver what the Occupation Generation deserves. Occupation is a time that needs to be remembered by all of us who never had to endure it. These people are, for the most part, unknown or forgotten. They, also, deserve to be remembered. Formally. Every Donation helps the campaign progress forward. Donations help keep the campaign going into the future. Please Donate and help the Campaign. Thank You.

Campaign was set up in 2018 by South family - Who went through the Occupation of Jersey - ITV Channel Reported on the Campaign Launch.in 2018

Various articles in Press About Campaign and Family