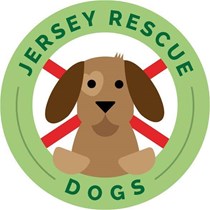 Weʼve raised £1,110 to help Alison, John & their dogs that cant be rehomed & living at JRD HQ and help them with vet fees, beds & food.

Ana, Jen and Kelly have taken on the Durrell 13k challenge. Ana has recently regrettably had to give up her passion and successful business of dog walking due to being diagnosed with a tumour attached to her L5 spinal nerve which results in chronic pain and other symptoms. Despite this she has decided to take on the challenge in order to raise awareness and money for Jersey Rescue Dogs, which she remains an active volunteer for, she has fostered over 30 dogs over the last 3 years. 13K is an incredible challenge for her, considering her ailment, but her passion is strong and she hopes that is enough to carry her through to the finish line! On behalf of Jersey Rescue Dogs, Ana would be incredibly grateful for any support you can give them so that they can continue their good work in helping (hu)mans best friend. I must add, her underlying fitness levels are shocking so if you want to donate per kilometre, base it on roughly 2K!

Kelly is joining Ana on this Durrell dash to challenge herself to do a run. Kelly has previously completed 1/2 of the Island walk, before her knee, due to her hip problems took its toll and forced and early retirement. The longest run Kelly has completed is the recent 10k run for the Stroke Association, so with this new challenge Kelly is exploring new boundaries. Kelly was diagnosed with Trocanteric Burstitis in both hips more than 15 years ago so this imposes some restrictions on Kelly's training, as really she is only meant to do low impact sports and can only do 1 training road run a week otherwise her hips flare up and makes walking and daily life painful. Kelly is a keen fundraiser for many charities, but for this run she would like to raise as much money for Durrell and Jersey Rescue Dogs as possible, firm in the belief that they both do an amazing job.

Jen didnt need much persuasion as the love of her life will be running that day, lucky for Henry Cavill shes no runner so HC is pretty much safe from being smothered in smooches.