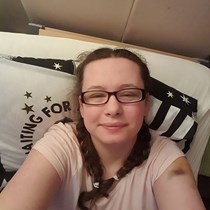 Weʼve raised £2,610 to enable Jess Laughton to have her left foot amputated due to debilitating pain conditions.

AS a little girl running around the playground at school, I never imagined that by the age of 22, I would be begging the world to help me fund the amputation of my lower leg.
It will cost over £10,000 for me to have the amputation done privately as the NHS ridiculously won't fund it. Even though it will give me a quality of life! So I am appealing to my friends, family and the kind people of the UK for your help.
Aged 12, as a competitive gymnast, I broke my ankle. Mother's Day 2005. Who knew that day would change my life?
The break caused me to develop a condition called Complex Regional Pain Syndrome (CRPS). This is documented as being the most painful thing on earth - even above childbirth! I also developed a neurological condition called Dystonia. This meant that my foot was stuck in a pointed down position and won’t move. Over the years treatments were attempted but they were unsuccessful.
Aged 15, I asked doctors to amputate my leg. The response was a 'no’. It was still early days.
Now aged 22, and ten agonising years since I was initially injured, the only thing doctors say to me is 'the NHS won't fund that.'
I am completely bedbound. Imagine being within the same walls everyday, having to rely on people for everything - including going to the loo! Due to the severe pain sensitivity in my foot whenever I move my leg the foot has to be carried on a cushion. Simple things are a 2 person job! I can't use a wheelchair or go in a car. I go to hospital on a stretcher. I take morphine 8 times a day just so I can live in my bed.
Having my lower leg amputated is unlikely to change my pain but it will mean that my foot isn’t 'in the way', it won't be able to be knocked. It is a painful, useless limb which is hindering my quality of life. With an amputation I could use a stair lift and a wheelchair, travel in a car, go outside, the possibility to start a family and go to work. Really £10,000 isn't a lot for all of that!
Please help me.
Thank You.
Jess