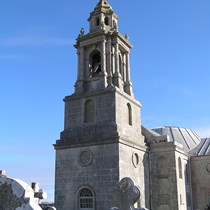 St. George's Church, Portland Dorset, is a church in the care of the Churches Conservation Trust. It is a Georgian church of National importance containing many unique features. For example, we have 2 pulpits that are centrally situated, causing half the congregation to sit with their backs to the Altar, a situation that would not be allowed today. This was brought about by the fact that when it was designed and built (1766) and an Anglican Church, it was very heavily influenced by the Methodists who at that time were still part of the Anglican Communion. Consequently it was built as a Preachers church with the emphasis placed on the 'Word' and less on the Eucharist. During the past year, we have suffered 3 thefts and one serious break in. The consequences are such that the South doors are damaged and twisted beyond economical repair and also the auto electronically operated locks are damaged and inoperative. Due to unsatisfactory opening and closing arrangements, we are finding that our visitor numbers and subsequent donations are down by 40%. We therefore conclude that replacement is our only viable option. St George's church is one of the flagship churches in the care of the Trust. We are a group of Elderly people who care for this church and although we are seeking funds from outside resources, we are doing all we can ourselves to make a significant contribution to our cause.