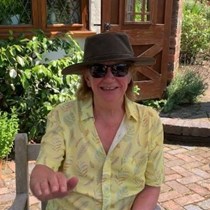 Jim Lea is a musician, and song writer, and probably best known for being the original bass player in Slade. Jim Lea's father Frank passed away from dementia in 2002. Jim, and the Lea family, had looked after and cared for him for years and saw how he suffered with this terrible illness. Since this time Jim and his family have always supported dementia charities.

Earlier this year Jim found some suitcases full of old stage clothes from the 1970's stored in his loft in Staffordshire. He decided to auction them off in support of local dementia charity close to his home. The auction started on 13th July 2020 and is 'live' now. Fans can make bids for numerous items of stage clothes. See www.jimleamusic.com for details.

Some fans asked that Jim consider setting up a Just Giving page, to go alongside the auction, so that fans and supporters can make additional contributions to the cause. This is a great idea - and Jim has agreed to open this fundraising page.

Jim thanks everyone for their support and help to raise funds for this charity which is close to the Lea family's heart.