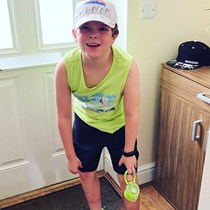 Weʼre raising £1,500 to Help with the cost of his Sisters Autism Support Dog Please. We will be doing 1 Million steps in 30 days equivalent to 500 Miles.

Kiera was born at 35 weeks, after my wife's waters had broken at 29 weeks, with PVL brain injury. She also has Autism and Mild Left Sided Hemiplegia.

It became obvious quite quickly that Kiera was a happy determined little girl who wanted to be mobile. With the help of Chiropractic treatment and Physio she was able to crawl at 15 months and walk at 2 years.

She tried hard at school despite learning difficulties and poor working memory. She also struggled with sensory overload until it reached the state she could no longer cope with a classroom environment.

The only thing that would help with her overload was Dogs,Wolves and Horses. Through her love of dogs she began to engage in learning and the outside world again.

With puberty Kieras brain reset and many of her life and working memory skills were lost. Although she had full time support at school she hasnt been able to attend and has had to relearn day to day self care. Her left, weaker side of her body is not growing as it should due to the right side taking the strain of keeping her mobile. She has daily physio and wants to engage with the outside world again, but is struck with anxiety, panic and sensory overload. She barely leaves the house, or even her room and has frequent meltdowns. We were at our wits end when her Dr suggested an assisstance/support dog.

We found http://www.autismdogs.co.uk/ and after a successsful visit Kiera has been accepted onto their programme. But, its not cheap.

My Son's and I are going to walk 500 miles in 30 days from the 23rd July 2020 to raise money for his sister (Kiera) Support dog. We are all going up on the 4th August to hopefully find what Dog will suit Kiera.