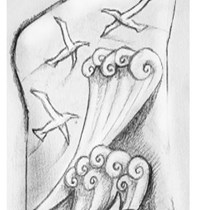 Weʼve raised £18,519 to Build a sculpted granite memorial to honour the Solomon Browne and Union Star crew and passengers who lost their lives.

This year is the 40th Anniversary when on December 19th 1981 the Solomon Browne lifeboat was lost with all her eight crew and along with the 5 crew and 3 passengers of the coaster Union Star.

The MV Union Star was launched in Ringkøbing in Denmark just a few days earlier. A mini-bulk carrier registered in Dublin, Ireland, it sailed to IJmuiden in the Netherlands to collect a cargo of fertiliser for its maiden voyage to Arklow in Ireland. It was carrying a crew of five: Captain Henry Morton, Mate James Whittaker, Engineer George Sedgwick, Crewman Anghostino Verressimo, and Crewman Manuel Lopes. Also on board were the captain's family (his wife Dawn with teenage stepdaughters Sharon and Deanne) who had been picked up at Brightlingsea in Essex.

Near the south coast of Cornwall, 8 miles (13 km) east of the Wolf Rock, the new ship's engines failed. The crew was unable to restart them but did not make a mayday call. Assistance was offered by a tug, the Noord Holland, under the Lloyd's Open Form salvage contract but Morton initially refused the offer, later accepting after consulting his owners. Winds were gusting at up to 90 knots (100 mph; 170 km/h) – hurricane, force 12 on the Beaufort scale – with waves up to 60 feet (18 m) high. In these extreme weather conditions the powerless ship was blown across Mount's Bay towards the rocks of Boscawen Cove, near Lamorna….

A request to launch the lifeboat was made by the Union Star and the Penlee crew assembled at the Lifeboat station; Coxswain Trevelyan Richards and 7 other crewmembers prepared themselves and the Solomon Browne for launch... John Blewett, Nigel Brockman, Charlie Greenhaugh, Stephen Madron, Kevin Smith, Barry Torrie and Gary Wallis.

At 8pm on the the 19 December 1981 the Solomon Browne lifeboat launched and met 15m waves and hurricane-force winds as she battled towards the Union Star coaster. By now neither the Navy helicopter nor the tug that had also come to her aid was able to get close enough in such conditions. Reaching the scene at around 8.45pm, Coxswain Trevelyan Richards and his brave crew made repeated attempts to get alongside and take people off the Union Star. Once, the lifeboat was thrown on top of the coaster only to slide off into the next towering wave.

The helicopter crew could see that the lifeboat crew had some survivors aboard but that there were two people still on the coaster and one, if not two, in the water. Then, moments later, at 9.21pm, they heard over the radio:

The message ended abruptly but Lt Cdr Russell Smith, at the controls of the helicopter, could see the lifeboat, still apparently under control and heading out to sea. He took this as his cue finally to lift his aircraft out of the dangerous area where she had been hovering for so long and head back to Culdrose. He had assumed the lifeboat had made the same decision to turn for home.

At this point, there was only one other witness left: the tug Noord Holland standing off, about a mile out to sea. Her skipper, Guy Burman listening to the vain attempts by the Coastguard to regain radio contact with the lifeboat, could see Union Star, the casualty vessel, right up close to the cliff and, intermittently, the lights of the lifeboat. His last view of the lifeboat was when she appeared high on the crest of a wave, silhouetted against the coaster's lights. Minutes later, the ship suddenly went dark: possibly the moment she was at last tumbled over at the foot of the cliffs.

By the time cliff rescue teams arrived at the scene, the Union Star was already wrecked at the foot of the cliffs and there was no sign of the lifeboat. When she was eventually found, the wreckage gave no real clues as to what happened other than that she was ultimately subjected to the most shattering and violent force imaginable. The largest portion of the lifeboat, including the heavy engine compartment, was found 300m to the east of the Union Star, which suggests she met her fate here.

With the 40th anniversary this year the families of those who lost their lives on the 19 December 1981 are working with the National Trust to place a large beautifully carved granite memorial in a meadow alongside the coast path directly above where the disaster took place.