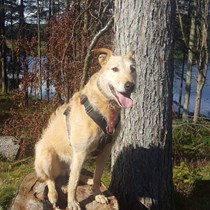 I've had Oliver since he was 7 weeks , my first dog from a puppy and he came at a time when I was going through a depression that was due to get worse. He soon became my daily pleasure and distraction from the daily grind that was slowly bringing me down. eventually I had a breakdown and he saw me through it.

He knew before I did if I was going to start to have a panic attack or go into meltdown, he comes and sits in front of me and almost blocks me from carrying on. I would often end up on the floor hugging him in tears. He always knew and was always there. He Is the reason I am here today and I took the path to becoming a dog trainer and starting the business.

I have a love for all of my dog's but I just can't explain that special connection I have with him, I can't imagine him not being here and I'm trying so hard not to think about it, it tears me apart.

Oliver is now 9 and in December 2018 I noticed he was slightly lame on his back right leg, so I gave him some lead rest and it seemed to cure it for a while. for the next month or so he would be slightly lame on and off. On 25th Jan 2019 I took him to the vets where they agreed he had some swelling and lameness so he was booked in for x-rays and further investigation on the 7th Feb. When he went in I just had an awful uneasy feeling, I knew there wouldn't be an outcome I would want. I got the call to say he could be collected along with the gut wrenching news they had found an abnormality on his bone and they were sending his x-rays to a specialist. The next day I cancelled my clients and stayed at home with my boy, the results were due in a few days.

Monday 11th Jan - The phone rang and I knew it was the vets. I took a deep breath and answered. I heard the news it was a tumour along with the only options are put to sleep or amputation, and even with amputation he may still have 6 months to live. I couldn't take it all in. my rock was leaving me. All this after loosing my old boy Ziggy in Nov 2018.

I was unable to book him in for. The amputation right then, I had too much to think about and it didn't seem real. I called the next day and got him booked in for his amputation on the 13th Feb. One of the worst days so far.

All went well with the amputation and I could collect him the next day. I was told we did the right thing amputating as when they took the biopsy to send away for analysis the bone just crumbled and there was a large hole, it was a matter of time before the whole bone broke. the pain my boy must have been in was unbelievable but yet he still looked after me.

The next wait was for the biopsy results, there was a chance it wasn't osteosarcoma which is very aggressive and sadly the most common type of bone tumors in dog's. I cleared my diary to look after my boy and the next 5 nights I slept downstairs with Oliver, he was really struggling with the change and uncomfortable, I felt quite helpless and just hoped me being there was a comfort to him.

Monday 18th Feb, to the vets for a check up...and they had the results. It is osteosarcoma, I stayed strong , spoke with the vet about options. Because it is so aggressive by the time a diagnosis is made the cancer has spread and it usually targets the lungs next. Despite having chest x-rays which were clear the cancer is so microscopic as it spreads it wouldn't have been picked up until it gets larger With amputation and no chemo he would have 3 to 6 months to live, with chemo we could have 12 months and staying positive, maybe more.

Chemo comes at a cost, but I just couldn't walk out of there saying no and sentencing my best friend to death in as little as 3 months. I would find a way to get the money and give him the quality of life he deserves. So this is where I ask for your help and support in donating what ever you can to help me with the costs of Oliver's chemotherapy.

Any help you can give would be so very greatly received....I didn't want to do this, but I have no choice. Thank you from my boy Oliver and myself.xx