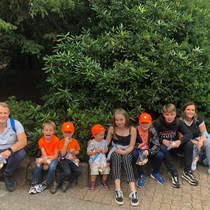 Weʼre raising £25,000 to help support Joel the most brave and positive little boy with his fight against cancer

This is our nephew Joel Shaw, he is an eleven year old who like most other boys his age loves life - football, his Xbox and playing with his friends

In October 2018, after discovering a small lump on his arm, the family received the awful news that Joel had been diagnosed with a very rare form of cancer. Ewing's Sarcoma is an aggressive type of bone cancer that only affects children. Fewer than 30 children in the UK develop this disease each year.

Joel underwent weeks of tests, scans and biopsies and started an intensive course of chemotherapy, radiotherapy and surgery spending much of what was a very tough 12 months in hospital. Despite a number of setbacks including many unplanned visits to hospital, blood transfusions and extended treatment, he kept smiling all the way and was just focused on putting the treatment behind him.

Joel started high school this year and on 12 September 2019, in front of his whole family and all the staff who had cared for him, Joel rang the bell in Manchester Children’s Hospital which was to signify the successful end of his treatment, the start of his recovery...he couldn’t wait to go outside, play with his friends, get back to school and see his hair grow back - he even kept a weekly photo diary of his hair!

Just a few weeks later on 6 November 2019 an ambulance had to be called for Joel and soon after his family received the devastating news that the cancer had returned and spread, including two tumours in his spine which have severely restricted his mobility.

Joel and his family have some incredibly tough days ahead. He is so positive, funny, caring and a genuine inspiration to everyone around him - he has been obsessing over garlic mushrooms from his local Italian restaurant (as all the nurses in his ward will testify!) and carries pictures of food around hospital with him. In hospital he has been researching places around the world he wants to visit in the future (mostly food based!) and it is really so important that he has positive experiences to look forward to.

Joel is no stranger to hard times having lost his wonderful mum Julie when he was just five. His Dad, his brother Jake and his sister Jasmine are doing absolutely everything they can for him and it would be amazing to be able to help them as much as possible. Simple things, unpaid days off work to stay in hospital, caring for Joel at home, travelling to Manchester, practical changes to Joel's house for when he is at home all have to be covered.

Joel has had, and is still receiving tremendous care and support from the Children’s Cancer Ward at Manchester Children’s Hospital and from The Christie. In recognition of this, a donation will be made from any funds raised to help to raise awareness; and to bring the fight to this terrible disease. His friends and family will also be organising a number of fundraising events.

Please donate to help to make their lives just a little easier and at the same time help us to support the fight against cancer.