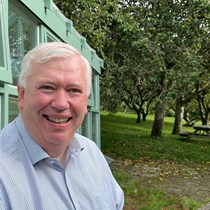 John Ault will be walking from Land's End to John O'Groats using the Conqueror walking app over the coming months.

Yes that's 1,083 Miles or 1,743 Kilometres. He won't be walking the route itself but will be building up the miles on his daily walks and with special guests and friends along the way. Yes really! His plan is to walk the distance starting in late August and completing the distance between work commitments before the May elections in 2022. That's an average of over 8,000 metres per day if completed by the end of March. Some will be on the route and others elsewhere. It will all be logged using his phone - so no cheating!

He is trying to raise at least £2000 - just over one pound for every kilometre he walks!

Every day John will record the steps he's taken to the Conqueror app and show his progress along the virtual route.

WHAT THE FUNDS ARE FOR

In 2020, Democracy Volunteers funded research to assess whether young people are put off voting because of the formality of the voting process. I and Harry Busz conducted research surveying over 1000 young people who had been eligible to vote at the 2019 UK General Election. We asked them a number of questions, especially looking at the process in the polling station, rather than voter registration, which has often been the focus of youth engagement process.

'When looking at non-voters it became clear that not only was abstention not a political choice but one which was often simply affected because individual young voters did not feel sufficient agency to vote because of their belief that they did not understand the process of voting, irrespective of whether they were engaged in policy. In our survey, of the 205 individuals who did not vote, 35 (17.1%) stated that the formal process of voting was the main factor putting them off from voting. A further 27 (13.2%) listed it as somewhat a factor in their decision not to vote. This means that over 30% of those young people not voting are simply excluded because of the formality of the process of voting.'

We believe that a pilot project to deliver a training programme, piloted by our team in schools/colleges to demystify the voting process in polling stations, could be a way forward to engage young people in attending polling stations and voting.

So we are launching this fundraiser to support this. Please be as generous as possible!

John is the Director of Democracy Volunteers and is one of the UK's leading experts on elections and election observations. He is conducting his walk from Land's End to John O'Groats both literally and virtually. His walk starts at Land's End and ends at John O'Groats but he will log the miles using the Conqueror app. This needs him to walk over 1700kms to get to his goal. He plans to do this over the next new months. As part of the challenge he would like to walk with friends across the UK in their area. Get in touch with him via Twitter if you would like to help him on his walk. All the miles he wracks up taking a walk will contribute to his target, whether on the official route or when out and about. As part of the challenge Conqueror will also plant one tree for every 20% of the walk as John progresses.

More details of the research conducted by Democracy Volunteers can be found HERE.

John is the Director of Democracy Volunteers which is Europe's leading domestic election observation group. https://democracyvolunteers.org/about-us/team/