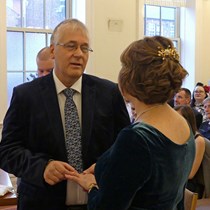 John was diagnosed with Acute Myeloid Leukaemia in November 2018. He has a rare genetic mutation, and needs a targeted drug to help him fight this terrible disease.

This drug isn’t available on the NHS for John’s rare condition, but he needs it to give him the best possible chance of survival.

In October 2018 John felt ill with high temperatures and other symptoms typical of flu. A doctor’s examination told him that he had a virus, and to ‘sit it out’ with paracetamol and sore throat tablets. After two more weeks, he was told that it could be tonsillitis and was given antibiotics, and then on a third visit an appointment was arranged for a blood test. He didn’t make that appointment, as on 4th November he was admitted to A&E in Warrington with a racing heartbeat and other serious symptoms. The next day he was told that he had leukaemia, and was rushed to Whiston hospital in St Helens by ambulance.

A further diagnosis at the hospital told us that he had Acute Myeloid Leukaemia and would need three courses of chemotherapy over several months. At that stage he was very poorly, with widespread pneumonia and other infections. After the first course lasting six weeks he was out of danger and allowed home to recuperate before the next course early in January. He was home for Christmas, and he and his fiancée, Anne, were married in Warrington at the end of December. Two more courses of chemotherapy followed, with some good news at the end of the third session. He was in good remission, and would only need to be a day patient for a few months, and then three-monthly checks at an outpatient clinic for a year. What a relief, the end of treatment was in sight!

However, the week before he was due to be discharged from Whiston his specialist gave us some bad news. It was already known that John had a genetic mutation that had caused the leukaemia, but a more detailed genetic test had flagged a new mutation, of which John’s is a rare form. Up until then, John’s leukaemia was under control but it turns out that the chemotherapy wasn’t enough and now he desperately needs a bone marrow transplant, as soon as possible. In his doctor’s words, this is ‘big treatment’. It’s far more toxic for his organs, and there are many risks along the way which will be life threatening. His care will be transferred to Liverpool Royal Hospital under a team of specialists and treatment will start as soon as a donor has been found.

John, Anne and their family are in shock, and completely devastated. “It was hard to accept the first time he was diagnosed; we couldn’t believe it was happening,” says Anne. “But now John is facing an even bigger battle. His next treatment will be so difficult for him. This journey is far from straightforward, and far from being over. Without a bone marrow transplant the disease will prove fatal for John.”

There are two other barriers to his successful treatment and recovery. He needs a bone marrow donor as soon as possible. He’s on the bone marrow recipient register, but it may take time to find a good match for him. Time he doesn’t have.

A ray of hope

In the meantime, there is a drug that may help, which will inhibit the gene that has mutated, but this isn’t available on the NHS for John’s rare form of leukaemia. One dose, lasting two months, costs around £11,000, and he may need several doses. It’s been shown that it could help to put him in a better position before his treatment, as it will curb the development of further mutation of the leukaemia cells, which could give him more time for a suitable donor to be found. This drug has also been shown to improve prognosis for recovery after treatment, but time is running out.

All donations will go directly to John to help fund this vital treatment.

To find out more about bone marrow/stem cell transplants follow this link :https://bit.ly/2Tf8B6l

If you're interested in becoming a donor read more here: www.dkms.org.uk

I'm Anne, John's wife. His family and I love him dearly and we want to help save his life.