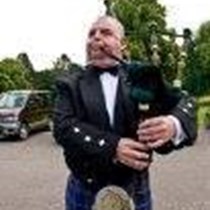 Weʼve raised £1,130 to erect a marble plinth at the National Memorial Arboretum in commemoration of the RAF Path Finder Force.

The RAF Bombing Offensive against the Third Reich got off to a disastrous start, with Bomber Command’s (BC) aircraft being no match for the German air defences. A switch to night ops greatly reduced the casualty rate, but at a cost to accuracy, with large numbers of bombers failing to find their targets.

In order to address this issue a specialist force, known as the Path Finder Force (PFF), was set up in Aug 1942, commanded by an Australian airman, Gp Capt Don Bennett. Initially comprising 5 squadrons, the PFF were first to receive the latest navigation technology, and developed tactics and techniques to mark targets using specialist flares to improve the accuracy of the main force.

The concept proved to be extremely effective, leading to the PFF being elevated to Group status. It became No 8 Group of BC in January 1943 and eventually grew to a strength of 19 squadrons. Commanded throughout its wartime period by Don Bennett, promoted to Air Vice-Marshal in December 1943, he was the youngest officer to ever hold that rank.

The PFF attracted some of the best aircrew serving in BC, including many from Australia, Canada, South Africa and New Zealand, as well as airmen who had escaped from countries in occupied Europe, and their elite status was recognised by the award of the PFF badge, worn on the left breast pocket flap.

During its short existence the PFF flew over 50 thousand ops against some 3440 targets. Around 3727 PFF airmen were killed on ops.

The RAF Wyton Heritage Centre maintains the Path Finder Collection to remember and commemorate all those brave young men of the PFF, and intends to erect a memorial to No 8 (PFF) Group in the National Memorial Arboretum. Any help towards achieving this goal would be greatly appreciated.

Born in Motherwell, Scotland, I joined the RAF in 1979 spending 30 Years as an aircraft technician at various stations around the world. My last posting, RAF Wyton, I got involved with the PFF Museum. I retired in 2009 and am now employed as a manager at Marshall ADG, Cambridge.