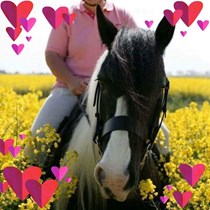 My dad, John, is an amazing man, he was born with no legs and only one arm. His elbow and wrist are both fused and he also only has a thumb and his only 2 fingers are fused together.

To many people, life like this would be uncomprendable however he has not let his disability stop him from doing anything and he has always been extremely independant. Until very recently, he used a walking stick to push himself in a standard wherlchair. He was self employed for over 25 years and has also been a civil servant. He has only just given up driving last year after driving his whole life with specially converted cars.

He has done many things in his life and some of his hobbies have been playing the harmonica and trumpet in many bands including abroad, swimming both for leisure and competitively, horse carriage driving, cross stitch and tapestry work and he recently joined a local choir.

Not forgetting, he has been an excellent dad to me and is always there for me to help me out.

He regularly goes to a local group and he is picked up in a converted mini bus so he can go in his electric wheelchair. This has been a huge lifeline for him, especially since my mum passed away last year after a long battle with breast cancer. Without going to his group he would not of left the house and he can meet up with friends and do a little shopping. More recently, his health has deteriated and his busy life has took its toll only his only shoulder as he has used it for everything. Along with recently breaking his wrist (which he done falling from his wheelchair) this has forced him to turn to his electric wheelchair more and more. The electric wheelchair he has now is too heavy for me to lift into the car and he is now looking to buy another one that will dismantle to put in the car. He has looked at the different types that would suit him and they are around £2000. I know this will improve his life hugely and will give him back the independance he used to have.