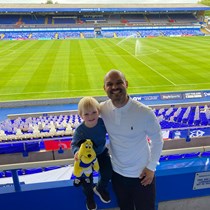 Weʼre raising £10,000 to Join Dean's Journey in raising vital funds for life changing cancer treatment through the BCFC 10 for 10 Challenge

Health and medical
10 days to go

Blues to join Dean on his journey

Birmingham City are coming together, to help one of our own.

Dean Prentice, a coach in the Women's Regional Talent Club, has spent the last 16 months battling bowel cancer, which spread to his liver and kidneys.Dean has now been told that he must undergo a new course of chemotherapy for his liver as the previous chemotherapy treatment has not been working and because of the risk of complications it is not possible to operate on his kidneys so instead he requires a special drug that is not available on the NHS, for at least six months. So Dean's friends and the Club have joined forces to raise funds to help the 28-year-old and raise awareness of bowel cancer.

To kick-off a series of events Blues players, coaches and staff have signed up for a '10 for 10 challenge'. The challenge is to complete the journey from St Andrew’s Trillion Trophy Stadium to all the 91 football ground in the league and Wembley - a distance of 9,575 miles. Each participant donates £10 to Dean's cause and has to complete 10 miles through either cycling, walking or running.

Once they complete the 10 miles they nominate a further five people to complete the challenge. Dean, who has a three-year-old son, Kyton, has also coached in Blues Academy and the Community Trust. He is a popular figure liked by colleague and the numerous players he has helped to nurture. And despite his illnesses, he has continued to coach the RTC youngsters and share his knowledge of the game and passion for his beloved Blues.

Dean's courage and determination has inspired us to be part of his journey. You, too, can get involved by donating to the JustGiving page that he been set up to help Dean.

Hello, my name is Dean Prentice, I’m 28-years-old and I work for the Birmingham City RTC programme as an Academy Coach to the U9s and U10s. I’m currently fundraising to raise money for life changing treatment in order for me to spend further time with my son. I would like to share my story with you.

In December 2018 I took myself to hospital with what I thought was acid reflux in my stomach. Following a number of tests, I was diagnosed with Stage Four Bowel Cancer and I was told that the cancer had advanced to other organs in the body.

I was absolutely heartbroken to hear this news but remained positive . I began chemotherapy treatment quickly after the news and have been on the treatment ever since. In June 2019 I was told that the cancer had shrunk and it was possible to remove it through an extensive operation. The initial primary tumour and the spots of cancer surrounding other organs were removed. They also completed a splenectomy where they removed my spleen as they had found the cancer has spread to there as well. It is only now that I realise how complex this operation was.

I shocked the hospital staff when after a week post operation I was out of hospital and starting to go back to work and look after my son. I was determined to persevere through the pain and get back to spending time with my son, girlfriend, friends and family. I continued to have a different chemotherapy treatment post operation, at times it caused me to be bed bound, something that is so rare for me. Despite it being so tough I continued to battle through the chemotherapy. I remained coaching at the RTC despite the treatment as working for Blues was so important to me and I continued to try to be the best dad to my three-year-old son Kyton.

Unfortunately in early 2020, I had a CT scan which revealed that the cancer had returned in my liver. I cried and cried, although it has been difficult I have brushed myself down and continued more treatment and like so many other people who have been affected, I’m still here.

The COVID-19 pandemic has forced me to shield for a several weeks and months and this has been so challenging for me. I was informed by the hospital that they would continue with my chemotherapy, however I was so scared of going to hospital for treatment. I have had to isolate from my normal life. I have not been able to see people or work with the players at the RTC. The most heart breaking part of this pandemic is the fact I have not been able to see my son. This valuable time with him means the world to me, like it would to any father and it breaks my heart that I have missed over three months of his development. Despite this I have continued to provide for him and be the best dad that I can be.

In June 2020, I spoke with my consultant following another set of tests and I was informed that I needed further treatment to my kidneys and that I would need to start a new chemotherapy for my liver as the previous chemotherapy treatment was not working.

I was told that they cannot operate on my kidneys due to the complications it would cause and instead we would need to preserve and maximise them for as long as possible. This is only going to be possible through a drug called Bevacizumab (Avastin) that is not available on the NHS and can only be bought privately. The cost of the drug is £1,500 per sitting and I would need two treatments a month alongside the chemotherapy and I will need to have this for a minimum of six months.

My life right now is in the hands of our fantastic doctors and nurses but I’m still here and they continue to want to help me. At 28, I have already overcome so many obstacles and want to continue to break them down and overcome them. I would love nothing more than to continue to be here for as long as possible.

Currently, I have no income due to the restrictions on the football and I know that this current situation has been tough for us all. I feel embarrassed to ask for money, however I have been left with no choice.

I would love nothing more than continue to watch our Birmingham City team, work with our up and coming RTC Academy players and continue to take my son up to our home of St Andrew’s. But I need your help!

I have been taken back by the support I have already received to try to reach my target. The Men’s First Team, Women’s first team, Academy, RTC, Community and former alumni of our club both players and staff have already committed to Join Dean’s Journey and there will be many more fundraising opportunities coming up. Any support would be so greatly appreciated in order to help contribute for me to get the treatment I need and to allow me to continue to spend quality time with you all.

My journey will continue to be challenging but like our anthem ‘we will journey on’ and hope you can join me in my 10 for 10 challenge!