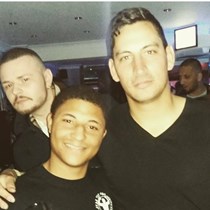 Weʼve raised £5,720 to In rememberance of Kevin Williams and all other victims of PTSD.

Kevin Williams sadly took his own life outside his flat in Basildon, Essex in the early hours of Sunday the 18th of March 2018. This is a collection for his family to help with either, funeral costs, getting friends and relatives together on the day or for any charity they see fit to best remember Kevin. During this ordeal, I hope you give generously.

Kevin was a Rifleman in 1st Battalion The Royal Green Jackets and then became a member of 2nd Battalion The Rifles where he was the youngest to deploy on operations in Iraq, turning just eighteen on the day of his deployment. Operation Telic 9 had seen some of the toughest fighting of the war. Since leaving the army Kevin found it hard to adapt to life as a Civilian. Often turning to friends for comfort and reassurance. After finding himself without a place to live, kevin was provided with a contact from the charity 'Combat Stress', where he was diagnosed with PTSD. He was then given a place to live and help with finding a job. While job hunting, Kevin aspired to become a Private Military Contractor (PMC), by doing a Close Protection Course. This gave him the opportunity to use his skills and experiences as a Soldier. Kevin then found a passion for Muay Thai, where he attended various training camps in Thailand and even gained his personal training qualification. On kevins ever pursuit to better himself by gaining more knowledge and skills, he had began work to become an electrician.

Kevin leaves behind many close friends and family that adored and supported him through his hardships over the years. The news of his death has come at a huge shock to all that knew him.