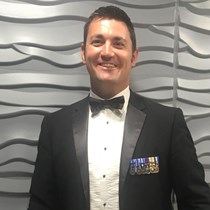 Weʼve raised £8,111 to support those who have helped me before, during & after my amputation. BLESMA, Royal British Legion, SSAFA, HULL4HEROES

As most people know I have had my left leg amputated below the knee on 13th Nov 2020 due to a blood clot caused by surgery from a military injury I sustained during service. . I ran 5k a few days before my amputation because I was scared id never walk again let alone run. I suffered but knew it was worth it especially when you all helped me raise a whopping £11,600 for Royal British Legion. I got my new prosthetic leg on 15th Jan 21 after my horrid fall in December which delayed my goal and dream of walking Into 2021. My first challenge was to walk the route I ran before my amputation and I did it on the 13th April 2021, 13 weeks from the day I got my prosthetic leg and took my first steps. 13 is my lucky number, I had my amputation on 13th Nov 20, fell on my stump on 12th Dec and re-operated to shorten my stump on 13th Dec. 13 weeks after my first steps I set out to walk again unaided over a good distance for charity and it was both painful but exhilarating. before the walk started I never truly believed I could do it but I did and I did because I knew that there was people out there worse off than me who needed the support of the charities I'm supporting.

On August 17th, 18th and 19th I will aim to climb the 3 national peaks starting with Ben Nevis then onto Scarfel Pike and finishing with Mount Snowdon. This is going to be the toughest test both physically and mentally that I have ever undergone. Its testing for an able-bodied person but for a recent amputee its gruelling. I will be looking for businesses to sponsor myself and a team of 10 others (including my own wife and children) who will join me on the challenge. Businesses will have their logo put on all the walkers t shirts and on a flag which will be displayed for the photo on each summit. Anyone interested in joining us or who wants to offer assistance in any way is to contact me direct to express interest and to find out details or pass on details. My direct email is (jon@pulserategroup.com). We are also looking for as much publicity as possible so please do put media outlets and PR companies in touch with me. Raising money for charities is my goal however, I am hoping to inspire people to realise with the right attitude and mindset you can do anything regardless of your circumstances. We are only limited by out own minds, in the words of my hero Muhammad Ali: If my mind can conceive it, and my heart can believe it then I can achieve it"

Help me support Blesma (The Limbless Veterans), SSAFA (the Armed Forces charity), Royal British Legion and Hull4Heroes because they have, they do and they will support me through what has been one of my hardest battles

I am raising money which will be split equally between my chosen charities. Your help in beating last years funds is hugely appreciated by the charities but personally it means so much and is the reason i will ensure i achieve this goal which to some is small but to me is huge.

here is my story:

I joined the british army as a Royal Engineer and served all over the world. My body took a hammering and i required knee surgery when i left in 2009. That surgery led to 11 years of suffering due to damage caused by a DVT (blood clot) in my leg. On November 13th 2020 I made the decision to have my left leg amputated below the knee to remove the already damaged tissue and vascular system. On 12th December 2020 i fell on my stump causing huge damage to blood vessels, bones and tissues. This resulted in another operation to shorten my stump. I came out of hospital on 20th December and was diagnosed with Covid19 on Christmas day 2020. My body had no energy to carry out any form of rehabilitation until January 2021. On the 15th January 21 i had my prosthetic leg made and started my journey to learning to walk again.

3 days prior to my initial amputation surgery i ran 5km to raise money for the Royal British Legion. I ran 5km in 33mins and was in absolute agony at the finish line. I said i would finish even if i had to crawl over the line. Thats because i know where the money raised was going. The Royal British Legion have supported me and many more veterans over the years and i needed to give back. £11,600 was the sum raised and i was over the moon with the generosity of everybody who helped me raise such a great amount. The next time round 13 weeks on from taking my first new steps I walked the same 5km route unaided (No crutches or walking sticks). My new journey has just begun..........

Please help me support 4 charities that have supported me and will support me going forward.

Ex Royal Engineer now Veteran. I underwent knee surgery after my medical discharge in 2009 which has left me suffering for over 11 years. In Nov 2020 I elected to have my left leg amputated below the knee. I fell on my stump in Dec, I started to learn to walk mid Jan.