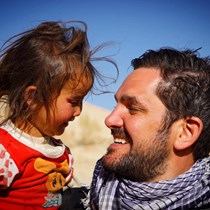 Having spent much of my life in conflict and war zones around the world, I have seen first hand that many children's lives have been destroyed before they have even began. Today (3rd September 2017) after much research and deliberation I have decided that my charity project for 2018 is going to be called 'RUNNING DANGEROUSLY'. My aim is to raise enough funds to run in 3 of the most dangerous countries in the world (Iraq, Afghanistan & Somalia) to pay for the education of 3 children that have been affected by war. I will be running in a 10K, Half Marathon & Full Marathon and I will be documenting the whole process from start to finish which will result in a 30 minute online documentary to raise awareness of this emotive and very important subject. Although my contribution to making a difference may be very small, i believe that by using sport and education we can at least give 3 young children hope, and where there is hope their is also life. Thank you for reading and if you would like to sponsor me, I will be very grateful as I'm sure will the beneficiaries of this project and their families. I will be donating funds to the Frontline Children Project Charities in 2018: War Child (Afghanistan), Unicef (Iraq) & Darlington Foundation (Somalia).

The Impact of Children in War:

War affects children in all the ways it affects adults, but also in many different ways too. First, children are dependent on the care, empathy, and attention of adults who love them. Their attachments are frequently disrupted in times of war, due to the loss of parents, extreme preoccupation of parents in protecting and finding subsistence for the family, and emotional unavailability of depressed or distracted parents. The child may be in substitute care with someone who cares for him or her only slightly – relatives or an orphanage. A certain proportion of war-affected children lose all adult protection – “unaccompanied children,” as they are known in refugee situations.

Second, impacts in childhood may adversely affect the life trajectory of children far more than adults. Consider children who lose the opportunity for education during war, children who are forced to move into refugee or displaced person camps, where they wait for years in miserable circumstances for normal life to resume, if it ever does. Consider a child disabled in war; they may, in addition to loss of a limb, sight, or cognitive capacity, lose the opportunity of schooling and of a social life. A girl who is raped may be marginalized by her society and lose the opportunity for marriage. Long after the war has ended, these lives will never attain the potential they had before the impact of war.

Listing the impacts of war on children is a sadly straightforward task:

- Death. Hundreds of thousands of children die of direct violence in war each year. They die as civilians caught in the violence of war, as combatants directly targeted, or in the course of ethnic cleansing.

- Injury. Children suffer a range of war injuries. Certain weapons affect them particularly. A landmine explosion is more likely to kill or seriously injure a child than an adult. Thousands of children suffer landmine injuries each year.

- Disability. Millions of children are disabled by war, many of whom have grossly inadequate access to rehabilitation services. A child may have to wait up to 10 years before having a prosthetic limb fitted. Children who survive landmine blasts rarely receive prostheses that are able to keep up with the continued growth of their limbs.

- Illness. Conditions for maintenance of child health deteriorate in war – nutrition, water safety, sanitation, housing, access to health services. There may be loss of immunity to disease vectors with population movement. Refugee children are particularly vulnerable to the deadly combination of malnutrition and infectious illness. There is also interruption of population immunization programs by war which may be responsible for increases in child mortality.

- Rape and prostitution for subsistence. These phenomena which often occur in situations of war, ethnic cleansing, and refugee life leave lasting physical impacts in sexually-transmitted diseases, including HIV/AIDS, psychological impacts and changes in life trajectory.

- Psychological suffering. Children are exposed to situations of terror and horror during war – experiences that may leave enduring impacts in post traumatic stress disorder. Severe losses and disruptions in their lives lead to high rates of depression and anxiety in war-affected children. These impacts may be prolonged by exposures to further privations and violence in refugee situations.

- Moral and spiritual impacts. The experience of indifference from the surrounding world, or, worse still, malevolence may cause children to suffer loss of meaning in their construction of themselves in their world. They may have to change their moral structure and lie, steal, and sell sex to survive. They may have their moral structure forcibly dismantled and replaced in training to kill as part of a military force.

- Social and cultural losses. Children may lose their community and its culture during war, sometimes having it reconstituted in refugee or diaspora situations.

- Child soldiers. It is estimated that there are tens of thousands of young people under 18 serving in militias in about 60 countries. They are particularly vulnerable to all of the impacts listed above.

* Please note that should the security situation deteriorate to a level where flights or visas are not granted or the personal risk assessed is to be too high in one of the selected countries then an alternative will be chosen.

**Jordan was diagnosed with Epilepsy during 2017 when planning for the Running Dangerously project and was made an ambassador for Epilepsy Action. A minimum of £1000 will be made to this charity from these funds too as per Jordan's request.