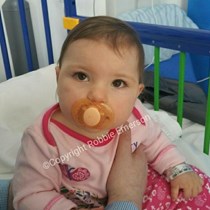 Weʼve raised £7,613 to Help save our 17 month old daughter Jorja Emerson she needs a second opinion and treatment for her uncontrollable epilepsy from experts.

Jorja is a 17 month old baby girl, born with a rare chromosome disorder - 1q43q44 deletion. Part of this condition includes severe epilepsy.
Jorja has been extremely unwell over the last 6 weeks with her epilepsy, with recently being admitted to PICU for the 2nd time in the past week.

Jorja is now back on the ward in the Ulster Hospital for monitoring.

The Royal Hospital is now of the opinion that Jorja's brain is decaying because of her chromosome deletion, and that we do not have much time left with Jorja. They say that there is nothing more that they can do and that her epilepsy is uncontrollable.

We believe that we can treat Jorja’s epilepsy. To simply walk away and say that we tried our best is just not an option that we are willing to accept!

Jorja’s Last Hope is to travel to America, where there are stage 4 epilepsy units, which we do not have here in the UK. They would have experience with Jorja’s specific chromosome deletion, they would have an expert epileptologist, along with genetic specialists, who can treat Jorja’s epilepsy and not just cast her to the side to die as if she is a lost cause.

Any one of her seizures could kill her at any minute - time is against us!

I beg you as Jorja’s daddy, who loves his little girl more than anything, for the opportunity to save her life. This is Jorja's last hope.

Go to Jorja's Last Hope on Facebook for more information.

I am Jorja's daddy, desperately seeking help to get my baby girl back to her normal, happy, healthy self.