Weʼve raised £51,007 to help Rob Burrow as he battles MND. Jamie Peacock and I will be running a 55km Ultra Marathon in Devon on October 3rd.

A fund will be set up to support Rob in his treatment and his family of a wife and three young children under 8 in the years ahead.

You can support by making a donation here. If you are a UK tax payer you can also tick the option to gift aid your donation. Gift Aid is great because it means the fund will get extra money added to your donations at no extra cost to you. For every £1 donated, the fund will receive £1.25 when you add Gift Aid.

Rob, 37, retired from playing at the end of the 2017 season, his final game seeing him winning his eighth Super League Grand Final. He is the club’s Reserve team Head Coach having led the Rhinos Academy team for the past two seasons.

The father of three played his entire career at Leeds Rhinos, making 492 appearances for the club following his debut in 2001, placing him in fifth in the club’s all-time list of career appearances. He scored 196 tries for a total of 1,103 points. He was capped 15 times by England and played five more tests for Great Britain including a Man of the Series performance in 2007 for the national side.

He is a two-time winner of the Harry Sunderland Award as Man of the Match in the 2007 and 2011 Grand Final. He won the Challenge Cup in 2014 and 2015 as well as three World Club Challenges and three League Leaders Shields.

Let’s raise as much as we can. 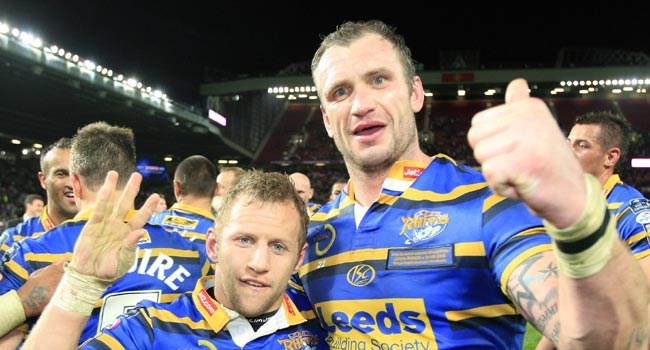