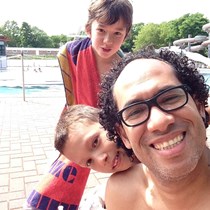 Weʼve raised £3,250 to Help my family escape the humanitarian disaster in Venezuela and resettle in Mexico

Hi everyone, my name is Juan, I am a violinist from Venezuela living in London. My country is seeing one of the darkest, saddest and most violent times it has ever experienced. The crisis there has reached levels that for us living in Europe are difficult to imagine. There is no food, and when there is, people have to queue for many hours. Inflation is currently at 720%. People are destitute. There are no medicines, the health system has collapsed, people are dying because of shortages of medicines or hunger.

I am trying to raise money to help my family leave Venezuela as soon as possible and move to Mexico where friends will help them to settle.

Four months ago democracy was attacked and the National Assembly was dissolved. This decision triggered protests all over the country.

Recent events have confirmed our worst fears: that Venezuela is now a dictatorial regime. The capital city Caracas, where my family live, is the most dangerous city in the country, with people being killed daily by the regime. Until now over 130 people have been murdered by police and army. Thousands are imprisoned and tortured.

In May this year, seeing all that was happening, I decided to go to Venezuela to support my family, friends and fellow countrymen who bravely take to the streets of Venezuela every day to protest and protect the freedom and human rights of our people. When I arrived in Caracas, it was shocking to see all the poverty, the fear and the destitution. In Caracas, water flows only two or three days a week for about four hours. Basics such as toilet paper, shampoo, soap or sanitary towels are almost impossible to find. People queue for hours to buy bread or milk at inflated prices. Antibiotics and other medicines are also impossible to find.

During my time in Caracas, I joined my sister Daniela and my 18 year old nephew Daniel at a peaceful protest that turned into a bloody nightmare, a nightmare that Venezuelans endure every day. The police shot stone bullets into the crowd, my nephew was shot in the neck.

It was very frightening. He was taken to a hospital and he survived, only to then have to escape the hospital to evade the police waiting at bedsides to arrest and then torture protesters.

That day I realized I had to take my nephew out of the country and I bought him a plane ticket for Mexico where I have friends who could look after him and help him to settle. He is really happy, he is going to start university in September and he is finally safe and enjoying life as a free young man.

In the last two months, the situation has worsened dramatically and it is now extremely dangerous to remain in the country strangled by a criminal and murderous dictatorship.

My mother, my sister, her husband and three children are still in Caracas where hope is ebbing away each day; The military and the police set fire to buildings, attack, arrest and torture ordinary people regardless of age or sex; I must help them leave the country as soon as possible before the window of opportunity is closed for ever.

I want my two young nephews and 9 year old niece to have the chance to enjoy a happy and safe childhood. I want my mother to be able to access healthcare and meet basic needs, and my sister and her husband the chance to build a new future for their children in a safer environment.

Inflation in Venezuela is currently at 720%. Average monthly income is $30(US) per month. People are destitute. A plane ticket to Mexico costs around $950(US) per person, visa costs and lawyer fees are very expensive.

Without my help my family will be in serious trouble. With your help I can help them.

Thank you very much for reading.