Weʼve raised £2,184 to invest in an award winning artist to create a series of sculptures from beach litter highlighting ocean plastic & loss of finite resources.

In 2012 I walked onto a beach on the North-West coast of Scotland so thick with mounds of litter that I feared drowning in it. Since then I have surveyed and mapped litter on over a hundred beaches. I have collected thousands of samples and created exhibitions & events which have engaged local communities & highlighted the nature & volume of plastic pollution.

Plastic is a wonderful, extremely useful material that is widely used, but our overuse & careless disposal is creating massive environmental problems for marine life and causes the death of many thousands of fish, birds & mammals.

It is estimated that 13 million tonnes of plastic enter our oceans every year and that by 2050 there will be more pieces of plastic than fish in the sea.

Every piece of plastic that appears on our beaches embodies energy. Embodied Energy is the energy that is consumed by all of the processes associated with the production of the plastic.

I am convinced that art can make a difference!

I will encourage people to help me weigh the CUBES, to calculate how many litres of petrol each #LitterCUBE represents & costs. 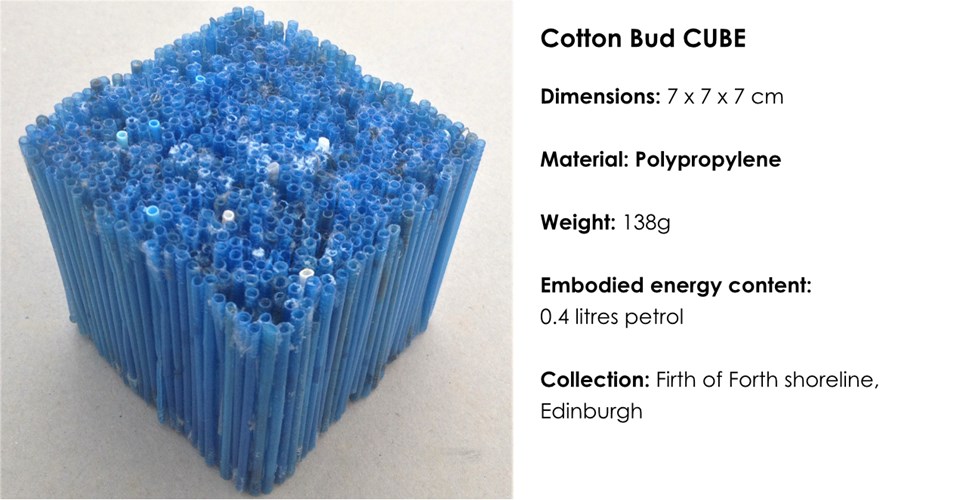 The #LitterCUBES will be made around Scotland on shorelines, harbours, in schools, arts centres & museums.

The #LitterCUBES will be simple, but intricately made, from plastic bottles, box strapping, cotton bud sticks, prawn boxes, mussel pegs & plastic fibres from all the waste we find in the ocean. The CUBES will act as visual triggers - prompting people to ask:

What’s it made from?

How did it get into our seas and beaches?

Why does it matter and how can we do to stop it getting there?

What can you do?

You can invest in Julia Barton to create a series of these #LitterCUBEs to weigh up the true cost of plastic pollution on our beaches. We need to raise £2,000 as soon as possible through Justgiving.com to kick start the project.

You can reduce your use of single use plastic, stop it escaping into the environment and help collect it from our beaches, waterways, seas, streets & land.

You can suggest places where the #LitterCUBES can be made or shown around Scotland - festivals, museums, harbours, schools, arts centres - wherever you think the impact will be greatest.

How can you invest?

Make a donation NOW of any amount.

All donations will receive an acknowledgement & a special reward.

Donations of £200 or more will receive a limited edition plastic fibre #LitterCUBE after the showing of the work. 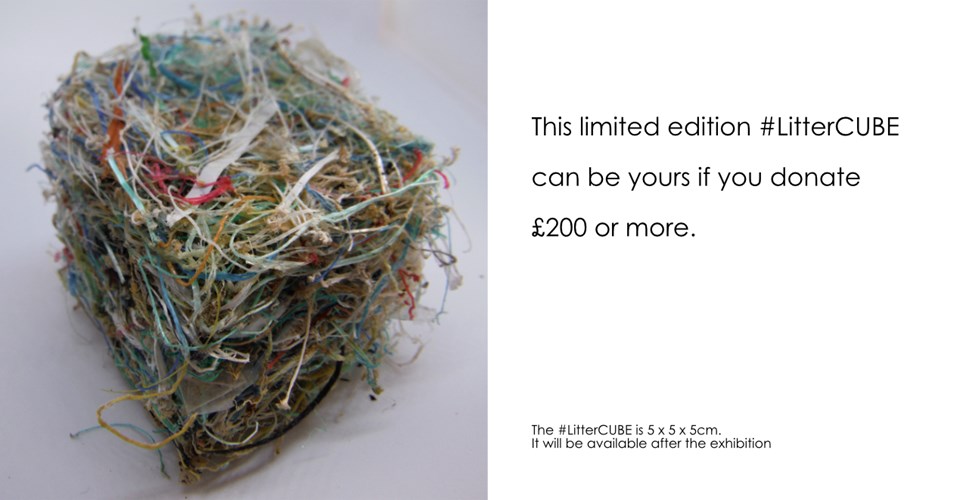 Support for the project

'The project reflects the ability of artists to respond to these challenges in interesting and imaginative ways that bring to life global concerns and encourage collective action.' Creative Scotland

‘a powerful warning about the future of the marine environment.’ The Scotsman on NEO Terra exhibition 2016-17

Julia's inspiring coast-to-coast grassroots Sci-Art work, including the use of data from Beachwatch surveys she organised, has been at the heart of Scotland's role in a sea change of awareness. I am delighted ....to have had the opportunity to work together with Julia on her inspiring and hugely popular 'Clean Beaches Scotland' Parliamentary event in December 2017." Calum Duncan, Marine Conservation Society

2017 Scottish Parliament: #CleanBeachesScotland Exhibition in partnership with Marine Conservation Society where 31 MSPs pledged support to anti-litter actions. An event that was well over subscribed, with attendees including MSPs, environmental organisations, researchers, harbour masters and activists.

2017-16 Exhibitions in Shetland and the NW Highlands: NEO Terra multi-media interactive exhibition had over 8,000 visitors. View audience comments on line.

2016 Published a Guide to Beach Litter

2016 Presentations at the University of Edinburgh & Southampton University

Julia is a visual artist who is passionate about the environment. She increasingly makes artworks with the aim of drawing attention to our wasteful society. In 2013 she set up the Littoral Art Project to investigate & draw attention to the nature & volume of beach litter.