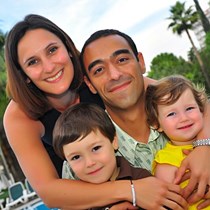 Weʼve raised £6,090 to ensure the legacy of Julian Jacobs continues with his two beautiful children - Joseph and Lola.

Julian Jacobs was more than a colleague to us. He was a friend, consult and trusted advisor to many and it's his personal values and beliefs that placed him in such high regard in our lives. Always a voice of reason, always a balanced point of view, never any grey areas: always black & white. He was an incredibly fair man who never took advantage, was always one to give rather than receive and would genuinely give his last pound to help someone else go without despite his own financial struggles.

Integrity, honesty and loyalty are the three words that we always arrive back at when describing this awesome personality. He made an impact with all that he touched and it's fair to say his memory will live on for many years to come in the hearts of everyone here at Keller Williams London Bridge and the wider UK team.

We have launched this fundraising effort to provide crucial financial support to the future lives of Julian Jacob's children. Julian's life came to an abrupt and unexpected end late on the evening of Saturday May 1st 2021 when he experienced a fatal heart attack.

His tragic passing has left his two beautiful children Joseph & Lola without a father and with it, a limited chance of fuller life without his income support towards their future.

Julian always put his children first, we know he was saving up for Joseph's bar mitzvah later this year. We feel as his ex colleagues and friends that we should do our utmost to pick up where Julian left off to not only help fund such life events as bar mitzvahs and milestone birthdays, but also do all that we can to build a fund to help fuel the future and long term education of both Lola & Joseph. This page has been set up ensure the legacy of Julian Jacobs continues with his two beautiful children - Joseph and Lola. Unfortunately Julian passed away at a very young age and we want to show how grateful we were to have worked alongside Julian. He held his children in the highest regard and this is our chance to help support them through their journey to becoming adults.

Julian you were a world class father and colleague. Rest in eternal peace brother. From the leadership team and agents at Keller Williams UK.