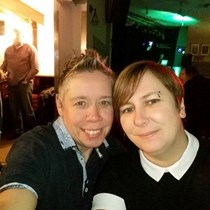 Weʼve raised £740 to after devastating news yesterday the Notts County Ladies players were told they no longer have a job.

As you maybe aware, Notts County Ladies on Friday 21st April 2017 was put into Liquidation by Club Owner Alan Hardy. Up until yesterday, a member of the Official supporters club, you can appreciate that this has not only been heartbreaking but soul destroying knowing that the team that we loved, supported and followed everywhere is to no longer be. This directive decision that Alan Hardy has chosen, not only as it been a devasting blow to the loyal fans, it has also resulted in a massive blow to the growth and development of Women's football as well as our local community such as our Sister Clubs and local community projects.
Whilst this is a deep sudden shock for the fans, please spare a thought for all the players that were ineffective made redundant. The thought of going to train knowing you have a season to look forward to and build upon only to be crushed within a few days, a few hours and 5 mins before it was announced on social media is a cruel way of finding out that you have to source your income via another method. Unfortunately I don't have the money that is required to save the ladypies from Liquidation, because if I did, I would. I am therefore asking our fellow Nottingham people, ladypie fans, fans of women's football if they can donate a small amount to help our players out. Alan Hardy has said he will not see them homeless, but has he forgot that to live, you require expenditure income to buy food, toiletries, fuel and the other necessary basic elements. If everyone can make a small donation it would show our appreciation to the ladypies, but also to show that the fans of Nottingham and of women's football stand united and pull together and help when times are tough and needed. The ladypies have brought us as a community together, like a family. We have stuck by them no matter what. Lets if possible show our support, that we as a community can bind together and show Alan Hardy what a big mistake he made by ending the ladypies ⚽️⚽️⚽️