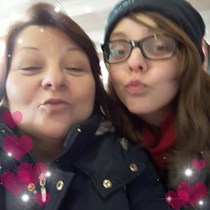 On the 18th April 2018 at 8.27pm Karliee & Timmy’s precious baby boy was born Still. Weighing 1lb 9oz. he was blessed and named Richie Terrence Burke at Nottingham City Hospital by the Revd. Gail Spence - God Bless Richie! Nanna feels privileged to have had special cuddles with you before we parted, you will stay forever inside my heart little man, till we meet again. Luv you xx

Viewing their 12 wk scan pics, Karliee & Timmy were elated at becoming parents once again and telling folk the good news.
At their 20wk scan, instead of the joy of being told they were having a boy or girl they were suddenly thrown into shock when instead, told complications with the baby and needed to do more tests etc.
Nothing could have prepared them for what they were about to go through. The devastating news that their baby wasn’t growing correctly and the fluids were low in the womb meant Karliee would need another scan in two weeks.

Their third and last scan confirmed the awful outcome, no fluid was in the womb, their baby was dying. The scan also showed its lungs were too small to cope, no signs of any kidneys or bladder. Their unborn wasn’t going to survive it had Potters Syndrome but would need blood tests taken from baby to confirm. (still awaiting the outcome of tests)

Their wish is for the plot to be a special place where they can go visit as a family and be able to explain to their first born Kaylib (when he is old enough to understand) about his baby brother who was taken to sit with the Angels above.

I thought it would be more beneficial to Karliee & Timmy if family and friends could donate to the cost of the headstone and leave a little message rather than send sympathy cards. Any small amount will help, if you could share this on your FB would be greatly appreciated thanks