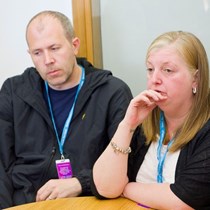 Weʼre raising £10,000 to get justice for my younger brother, Allan Marshall, who died while on remand in Saughton Prison. We lost a much loved family member.

Allan died after a violent struggle with prison officers. Horrifying footage of Allan being dragged naked from a shower block and stamped on, with a towel wrapped around his face, have shocked Scotland.

You can see the footage of what happened here:

Help us get justice for Allan and others.

We are calling on Scottish Government's Justice Minister, to take steps to ensure a tragedy like this is never repeated in a Scottish prison, and for those responsible to be charged and punished for Allan's "entirely preventable" death.

Allan, 30, suffered a cardiac arrest after being restrained by up to 17 guards at Edinburgh’s Saughton Prison – but officers involved were given immunity from prosecution over the death.
Officers had confronted him in a cell then dragged his naked body into a corridor.

Allan's aunt, Sharon Macfadyen said: “It would seem that if you wear a uniform and cause a death through restraint, you face no consequences.
The officers who caused Allan’s death weren’t disciplined and some have even been promoted. It’s disgusting double standards.”

His face was covered with a towel and feet were used to pin him face down on the floor. He suffered a cardiac arrest and died four days later Edinburgh Royal Infirmary.

A sheriff ruled his death was “entirely preventable” and his family has called for action to be taken against staff.