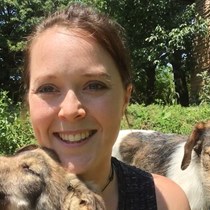 Weʼve raised £12,700 to Help give dogs like Scout the chance of a happy ever after.

I'm adopting a Street Dog named Scout and rather than get her couriered over to the UK, I thought it might be fun/terrifying/exhausting/foolish to cycle back with her instead. So that's what I'm doing. To raise money for Street Hearts BG - who found Scout and took her in and saved her from a life on the streets.

I'll be blogging about it here: www.k8andk9.com

You see, Bulgaria has a problem with street dogs, and Emma and Anthony at Street Hearts BG are trying to help.

About a year ago they set up a neutering campaign for their local area and in the process have somehow opened their doors to over 60 dogs at a time. Last March they also took me in to their home for a few weeks (like the wandering stray that I sometimes am) and I was so astonished by their tireless efforts to save the dogs in their area that I thought up a name, became their patron, set up a fundraising page and pushed them on their way to becoming a proper charity (still in the works - two countries worth of red tape to get through.)

You can see more of what they get up to day to day here: www.facebook.com/streetheartsbg

and see current available pooches on their website www.streetheartsbg.com