Mckayla and Cody raised £190 from 6 supporters 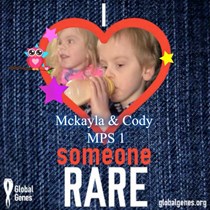 Weʼve raised £190 to Help make these life changing adaptions for both mckayla and Cody to give them a better living of life to due long term illness.

My Name is Mckayla and Cody we are both very precious.

In January 2009 I was diagnosed with a genetic disorder call hurlers syndrome, in March 2009 Cody my little brother was diagnosed while my mummy was carrying him this will never be cured. So April 2009 mummy and I set off to see the specialist team in Manchester sick children's hospital who advised the only options was to go through a bonemarrow transplant also ment I had to have chemotherapy to kill my own system, then on way back home the worst happened my mummy went into premiture labour with my brother Cody so he was born at 26 weeks. Then Cody had to start straight away on ert already fighting for his life.

I started my treatment of ert then July 2009 I went through my bmt and chemo which was a very rocky time for me due to my organs already been so badly damaged from my hurlers syndrome.Cody had his bmt and chemo in July 2010 he was icu due to fluid on his lungs and in his stomach due to hurlers but we both fought through our treatments.

hurlers is a horrible disease that only gives between 2/10years to live with or without a bmt. it effects lungs heart kidneys brain there's not a cure all bmt does is slow down the process as the professinals say. my spina op front and back was in March 2012 and codys was January 2017.

Our mummy has had to give up work in recruitment to care for us both 24/7.

Because of our needs for round the clock care my house needs adapted to give us both ground level bedrooms with hoist tracks fitted, a wet room so it's easier for my bath/shower times. I need special equipment to help me get around my home and the standard door sizes etc are not suitable. The doctors have expressed concern for the risks of us both falling and hitting the top of our nexks that would paralise us borh. so this extension build would also give us the room to accommodate both our wheelschairs to get around and also out of the house with ramp access.

2 fun loving children that need help from the community for adaptions due to CEC letting them down very badly. Cody and Mckayla both urgently need these adaptions to be made to there home for there daily living and it will also reduce the risk of falls hekp there illness.