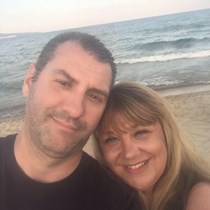 Weʼve raised £150 to in order to set up a registered charity called ‘Kath’s Voice’. Mum shouldn’t of died, please read this story to ensure it’s not you.

In October 2016, we got the devastating news that Mum had stage four terminal pancreatic cancer. The doctors had previously told Mum that there was nothing wrong with her. Just eighteen months prior to Mum’s diagnosis, she was told that she would need another scan six months later as there was a slight shadow although this wasn’t something that they were overly concerned with. When Mum returned six months later as instructed, the doctors couldn’t find the notes relating to this six month return. The doctors told Mum that they didn’t know what she was talking about despite her feeling unwell and losing weight. Like a lot of people in their mature years (and indeed younger years), Mum believed what the GP had told her and went away and kept silent without confiding in my sister or I at this stage. A year had gone by and Mum was now looking more and more unwell so I went to the surgery again with her. I didn’t have any medical training, but I did have union training and I told the junior locum Doctor that we wasn’t going anywhere until Mum was fast tracked and she could be seen by a specialist. It was a process that should have been adhered to previously and it was only because I was assertive and persistent that it happened. Why should one have to fight for this? The criteria in order for Mum to be granted seeing a specialist only needed two ticked boxes out of six and yet she had five!!

A few weeks later Mum was diagnosed. The doctor’s surgery also found details of the previous scan she should have had a year earlier too. There was not even an apology! When Mum was finally diagnosed, the correct process was not followed. My sister who was present with her can confirm that the ‘c word’ was not used once. The oncology nurse was supposed to be present to make sure that Mum understood the diagnosis. This did not happen! They sent her a letter with medical jargon that I had to decode using the internet! Mum was also given a biopsy that she was told was compulsory for her to have in order for her diagnosis to be confirmed however, this turned out not to be the case as they already knew the diagnosis! This indeed probably shortened her life even more so. Every process from start to finish was incorrect, inhumane and devastating for us as a family. I even had to fight to get Mum’s medication from the surgery and chemist before Christmas and if I had not been so insistent on Mum’s behalf, she would have been without any medication and her suffering would have been made even more unbearable as a result. I was never rude to anybody, but I was frustrated, extremely upset and was determined to fight to get what she needed. Nobody should have to face this when you are caring for and about to lose a loved one.

This is not a witch hunt for the NHS, its a cry and a plea for help as they are so stretched and under- resourced. It appears that only the assertive and dominant stand a chance of surviving under the current system. What if you are not a naturally assertive or dominant character? What if you believe your GP and do not have that much needed voice? My Mum didn‘t have a voice and on 11th April 2017, she finally lost her battle with cancer and passed away. We lost Mum’s physical body and her presence but know she will now have a voice and she will save others with this, her legacy.

In memory of my beautiful mum, I want ‘Kath’s Voice’ to be a registered charity for the patients that do not have a voice. A charity where they or their families can check their rights if they have concerns in this era of streamlining the NHS. This will be a charity for everybody, not just the terminally ill. This will ensure that everybody’s voice is really heard and procedures and processes are checked and correctly adhered to in their time of need.

I do this for you Mum,I know you would approve. We couldn‘t save you, but let’s save others through your voice. I love you Mum, always and forever.

A caring and giving person to everyone. Business owner, carer, Mum of two children with many friends. I always try my best for everyone and live my live to full and make the most of every moment.