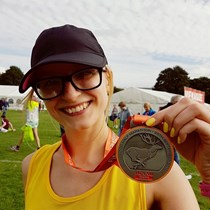 On the 9th of July I will be running the Women's Running 10K in Nottingham to raise money towards the running of Safe Haven Egypt and help fund a prosthetic leg for Ice, one of the cats in their care.

Safe Haven Egypt is a rescue run by two remarkable young ladies in Cairo. Frustrated at the lack of rescue spaces, their dream was to open their own rescue Centre to centralize the care and preparation of rescued cats for adoption abroad. They've since opened the doors to their second property, such is the high and constant demand to get badly injured, abused and neglected cats off the cruel street of Cairo. They currently care for over 150 rescued cats and kittens

Ice is one the SHE's rescue cats. When rescued, his lower front left paw was missing. Not a birth defect, perhaps the result of abuse, injury or maybe even chewed off through hunger. We will never know. Ice is a friendly chap who took on the role of guardianship of the kittens at the Haven. Often standing back while they ate first and chasing the workers who he saw as causing them harm and distress when just treating them! He had some hard life knocks and was being overlooked for adoption until Eardley Bryan, on a flight parent visit, decided to adopt this gentle boy and five other SHE cats. Ice is now in the U.K., but it is clear his paw, which he uses, causes him pain and distress. Ice has been accepted by an eminent orthopeadic surgeon to have a new leg or prosthesis fitted. His initial consultation is the end of June.

More information on the race can be found here http://womensrunninguk.co.uk/raceseries/nottingham-2017/ I'm hoping to complete the course in under 50 minutes for the first time so have been working very hard towards this!