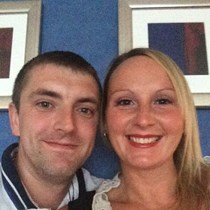 Danny & Leanne Waring have been together for over a decade. This year they were destined for their 'dream year'. They finally tied the knot in July. Now mum & dad to 4 gorgeous boys. Ted was born February & made their family complete. Leo, Zak & Joe all being amazing big brothers to Ted.

However at 4 months old, Ted began to lose weight, being constantl sick & refusing his milk. After months of hospital admittances, visits & invasive tests it was found that Ted has a large tumour behind his eyes & ears which has been diagnosed as cancerous! The worst news a parent can ever receive!

Ted has already undergone numerous operations 2 at diagnosis on his brain, he has had a 'cath line' tube put into his heart, which will help to administer chemotherapy, emergency surgery last week as he was leaking brain fluid & has now had another operation on his brain to fit a shunt ( A medical device that relieves pressure on the brain caused by a build-up of fluid). It now looks like they're back on track to start his 70 weeks of chemotherapy. Yes I did say 70 weeks!!! Just short of 17 months!!! If Ted gets an infection or any complications that can interrupt his chemotherapy regime but everything is crossed that there are no more interruptions or emergencies.

The family have to go to & from Manchester children's hospital & will be spending long periods of time away from their boys, family & friends.

Media reaseach has shown parents of sick children for an 8 week hospital reigime costs £2256. On this basis they will incur costs of £19,730!!! for 70 weeks treatment including fuel, eating, drinking & parking charges (with a parking reduction it's still £40 just to park). Could you survive on 17 months minimum of sick leave from your employer? I couldn't.

We know money isn't going to cure Ted or the pain they are enduring but it'll help give Danny & Leanne the time they need with Ted, without the added worry of the added financial strain of the additional hospital costs.

So I'm hoping everyone on this page now knows the name Ted Wearing, if you don't where have you been hiding?? Ted Wearing is the strongest baby I've ever met. Through all the trauma below he's still smiling & fighting. We want to show they're not alone in this battle x