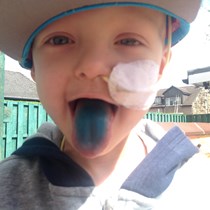 Kian is a 2 year old little boy who was diagnosed with stage 4 high risk Neuroblastoma on July 23rd 2015. Shortly after this diagnosis, Kian underwent his first cycle of chemotherapy called Rapid Cojec which lasted 70 days, and on October 2015 Kian was told that he still had Neuroblastoma in his bone marrow and 3 other hotspots alongside the primary tumour and he would have to under go a further 6 weeks of intense chemo which he is currently in the midst of before he can have surgery.

We are now trying to raise money for Kian to take part in a clinical trial in America. This is a preventitave treatment to ensure this horrible disease does not return to Kians body after treatment and is called DFMO which is not available in the UK. Every donation made towards this cause, no matter how big or small is one step closer to beating Neuroblastoma. He is a 2year old toddler who would give anything to be with his brother and sisters enjoying his childhood, please give him this chance.

The treatment duration is 18 months.

The cost of this treatment can be anything from £100,000 to £140,000 which is including the travel costs in getting him to America. We understand that this is going to be a difficult target to meet - but we are all ready to fight for it like Kian is!

No mother should have to watch their child go through an ordeal such as this horrible disease, he is the bravest boy I know and he will keep fighting untill every inch of this disease is gone!