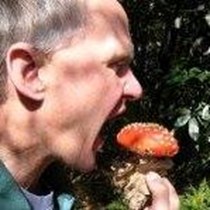 I took the cover photo three years ago when I used to go for regular five mile rambles with mum. At the age of 86, she is still physically fit, however, there has since been a severe mental deterioration due to diagnosed Alzheimers dementia. One Sunday morning last summer two policemen knocked on my door accompanied by my mother whom they had extricated from the central reservation of the M40 at Lewknor. She had spontaneously decided to pay me a visit & had caught a London bound bus which used the same bus stop for transport to me in Thame!

So, some sort of drastic action was required & social services were consulted with varying degrees of success. Ultimately we found a local charity providing care and support to help people live well with dementia at various sites in the Oxford area. For over five hours the incredible staff patiently facilitate games, quizzes, talks & sing-songs as well as a hot three course meal for service users. It is virtually impossible to overestimate the appreciation my sister & I have for this charity.

Looking through some of mum's old holiday pictures recently there was one of her next to a sign which said 'Uhura Peak'. This turned out to be the highest point in Africa, Mt Kilimanjaro, 19,341 ft above sea level which mum had summited at the age of 61, my current age! Now retired & rapidly putting on weight (thanks to my wife's wonderful cooking), I have decided to get fit to try & conquer this mini-Everest. I am going with a company called Intrepid & flying out to Tanzania on 5th October this year to start the 7 day trek.

I am funding this expedition entirely myself. Thank you for your interest & if you are able to make a donation, all proceeds will go to Daybreak Dementia Day Clubs in Oxford (https://daybreak-oxford.org.uk/ - Registered Charity No: 1113182). I shall be writing a blog on my progress so watch this space...Thank You

Last month (28th Aug), six friends & I set off at 22.30 from a car park near Osmotherley (West Yorkshire) to attempt a traverse of the North Yorkshire moors (Lyke Wake Walk, 40 miles in 24 hours). By 04:30 the rain came & the wind blasted into us on those fickle moors. After 19 miles, we stumbled into an amazingly open pub & soon made the unanimous decision to abandon the quest. I was shivering cold, soaking wet & suffering cramps all over my body. I'd struggled up hills with shinsplints & breathlessness (having recently been diagnosed with mild COPD!). For a short period in the early morning I felt quite nauseous which added to my discomfort. Although this summer I'd walked the Aylesbury ring (33 miles in 16 hours) & the Cotswold Way (104 miles in 7 days), I now realise I'm not as truly prepared for this ultimate challenge as I should be! So now I'm going to start practising some Yoga to improve my breathing & core strength & try to lose some weight with a better diet. Stay tuned for further news..... 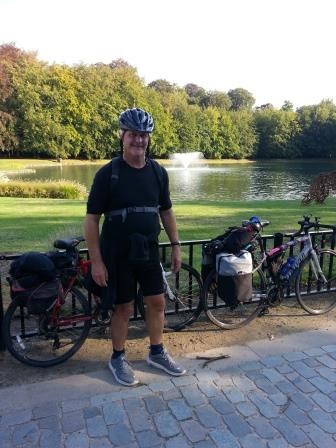 Unlike the curtailed Lyke Wake, my recent cycling trip to the Low Countries with 6 friends was actually completed. Unfortunately brake problems meant the 333 miles in 6 days proved even tougher than I'd imagined. Weaving around pedestrians, cars & other cyclists during rush hours in Antwerp & Brussels with no brakes was frankly terrifying! When they were adjusted, the weight on my pannier caused the rear brake to lightly engage. This may seen innocuous, but when cycling the daily equivalent of Oxford to London, it was unsurprising I had problems keeping up with the rest of the team. On the last day, I was so exhausted I failed to notice a hand signal from the rider in front & after he turned a sharp right, I ran straight into a pregnant policewoman (a concrete one that is!). Miraculously regaining control I encountered the reason for the obstacle - a tram line, which my front wheel duly engaged with launching me off the bike into a barrier fence .Much to the amazement of the cyclists following me I asserted my composure by waving to them on the other side of the fence, having managed to stay on my feet despite the unorthodox shortcut! Now I'm back I've caught a cold! Next week I intend to hike up & down the Chiltern escarpment for a rest.... 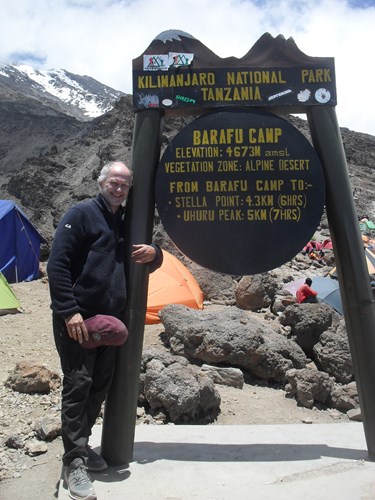 I did my best! Made it to Barafu camp (base for summit attempt) 15,239 ft above sea level, then at midnight I lead our group of ten up towards the top. After an hour or so, I started feeling nauseous with a bad headache coming on. Added to this I felt immensely fatigued & every step took my breath away. My throat was as dry as wombat's poo & I had to stop to take on water. Not good when everyone else is following so closely in convoy, so the lead guide made me fall back to be supported by Elya (my allocated personal guide). After half an hour the others were way ahead & I felt even worse & had to keep stopping. Gilman's point, a milestone to the summit was still some way off & I came to the realisation that even if I continued up, I might not make it back. Within 5 minutes of descent I was violently sick, I just wanted to lie down & go to sleep (Temp -10 DegCent). I felt delerious & if it hadn't have been for Elya I am convinced I would have perished on that damned mountain. Unfortunately the descent has taken it's toll too & I'm now walking with a stick due to a badly bruised big toe!

Climbing Kilimajaro proved much more of a challenge than I'd ever imagined. My team mates all made it to the top, & they all agreed it was the toughest thing they'd ever done in their lives. My roommate said reaching the summit was an anti-climax because this 22 times half marathon runner felt too exhausted to appreciate the moment. I know I made the correct decision to turn back but I'm glad I made the effort & who knows maybe someday I'll give it another go?!

Thank you all for your wonderful support & I'm sure Daybreak will greatly appreciate the extra funds to help them carry on their fantastic work.

The tourist shop owners at the end knew there'd be people like me there & I couldn't resist the temptation to buy this t-shirt (read the small print!) & a few bottles of Kilimanjaro beer!: 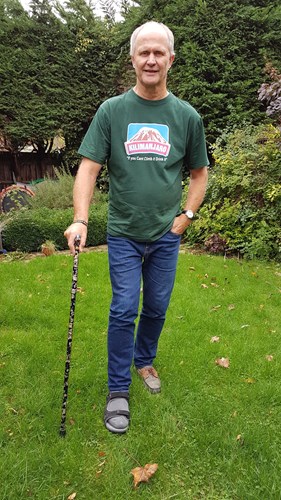