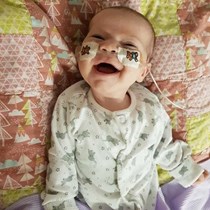 Emilia is so little and been through so much.
Myself and my colleague Debbi Pardoe run The Buckingham Luxury Car Boot (a Facebook group) and we are just trying to help Emilia's parents raise much needed funds.

Emilia is 12 weeks old and on the day she was born it was clear she wasn't too well. Her breathing was fast and her hands and feet blue. After a battery of tests, her parents received the dreadful news that their precious baby had been born with a serious heart condition requiring immediate surgery. Reluctantly, her parents handed Emilia over to the neonatal intensive care team so they could start her on the medicine which would keep her alive until they could get her to Southampton for surgery.

It took the retrieval team 12 hours to get Emilia to Southampton and in that time she went downhill resulting in her needing to be intubated until surgery 8 hours later!

On April 12th, at 8 days old Emilia had open heart surgery. Her parents say these were the longest 6 hours of their lives. Emilia spent a further week on ventilators after one failed attempt at waking her up due to her heart having been working for so long before diagnosis.

Emilia got through that surgery and was given 'home leave' but during the time at home Emilia became unwell and after a dash to Oxford intensive care, Emilia was retrieved by the Southampton team. It was discovered that the right side of her heart wasn't working too well resulting in further open heart surgery.

Since the last surgery, Emilia has been very poorly. They found more narrowing of her aorta and she requires even more surgery.

The financial strain on this young family is huge. There are many costs involved with time off work, travelling to/from Southampton plus the additional ongoing costs once Dan and Lou get Emilia home. That's why, as a family friend, I decided to set up this Just Giving page.

I am raising money for Emilia and her family ..., they've been through so much and deserve a little help xx