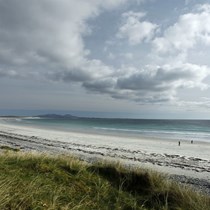 Weʼve raised £14,838 to help meet our legal costs after a Scottish court ruled my child can't be educated bilingually in Gaelic and English

Despite legislation to protect minority and indigenous language rights, mother tongue rights and my daughter’s human rights, a Sheriff in Edinburgh ruled that she must be educated solely in English. This followed a lengthy court battle with her father, who is opposed to Gaelic playing any role in our daughter’s formal education.

I’m asking for your support in meeting some of the costs incurred in my attempts to defend minority and indigenous language rights, Gaelic language rights, mother tongue rights and my daughter’s human rights.

I’m now facing the very real prospect that she will be the first in her family who’ll be unable to converse in Gaelic, and therefore to access full understanding of her heritage. I will continue to speak Gaelic to her of course, and do everything I can to ensure she is fluent, but with a 50/50 shared care arrangement, and a father who actively refuses to engage with her Gaelic learning, this will be extremely hard.

This has been an incredibly difficult year, and while it has affected me and my family on a personal level, I was aware in fighting for my daughter’s rights that there are wider repercussions around support for Gaelic and other minority languages. More understanding is required, more tolerance and respect, and in my opinion more legislation to protect children’s right to an education in their own language (especially if that education is readily and freely available). Anything you can spare would mean the world to me. I’m hoping to find 6000 people who can donate £10.

Thank you so much. Tha mi fada nur comain.

Read the full story below:

My name is Kirsty (Curstaidh) MacDonald, I’m a crofter’s daughter and native Gaelic speaker from North Uist in the Western Isles of Scotland.

Gaelic has been my family’s first language for - at the very least - the last thousand years. Although it’s a minority endangered language, it’s still the main language in our home, and that of my extended family in North Uist. Our history, identity and traditions are bound up in Gaelic.

It’s obviously extremely important to me that my daughter is fluent in her mother tongue, and the language of the family. But given that her two sisters are both fluent Gaelic speakers, likewise grandparents, aunts, uncles, cousins and friends, it is extremely important to her as well. That’s before even going into the widely acknowledged educational and cognitive benefits that speaking more than one language brings.

My daughter was born in 2014 and my relationship with her father ended shortly afterwards. Since then we have operated a 50/50 shared care arrangement.

During that relationship, her father was acutely aware of how important Gaelic was to me, and to my family. Much of my working life has been defined by my advocacy for the language and the rights of the Gaelic community. He lived with me and my older daughters, in a household where both Gaelic and English were spoken every day. It was accepted long before my daughter was even born, that access to a Gaelic education was a given. Indeed, it is a matter of record that this was agreed between him and me long before she was born.

In early 2018 however, my former partner announced that he’d decided not to permit our daughter to enter Gaelic-medium education - a position he maintained through an attempted process of mediation, and he subsequently refused to discuss the matter in any situation other than a courtroom.

Anyone who has ever met me, knows what my Gaelic heritage and language mean to me, and that it is more than just ‘important’ to me. It is who I am, and it goes right to my very soul. My former partner certainly knew that, and would have been under no illusion as to the devastating emotional impact his decision would have had.

Likewise, my daughter had been attending the Gaelic school’s on-site nursery (Sgoil Àraich) for the better part of a year by this point. The Gaelic school community was familiar to her because her sisters attended, and we all attend social events there. Her friends - including her best friend - were all preparing to enter into Primary 1 together. She was proud of her Gaelic learning and taking obvious pleasure and pride in it. It was an exciting time for the other children, but deeply unsettling for my daughter, who faced the possibility of being sent to an entirely different school. Her father’s choice of school was one she’d never set foot inside, it was considerably more crowded, and had no provision for her Gaelic language whatsoever. His key stated motivation was that it was within walking distance of his flat.

My daughter’s two half-sisters are completely fluent. In fact Gaelic was their first language and they have both experienced the significant benefits of Gaelic Medium Education. A 50/50 shared care arrangement in which my youngest daughter hears no Gaelic for one week in every two has significantly undermined her fluency; she understands but doesn’t speak much. I felt I had no option but to pursue the matter in court if I wanted to ensure her fluency.

Heart-breakingly, I lost the case in the Sheriff Court. In a decision which I still struggle to get my head around, Sheriff Peter Braid found that bilingualism (including literacy in both languages) was in the best interests of my daughter. But he considered that I should be charged with the development of her Gaelic language and literacy during the one week in two she spends with me, with no requirement for provision of Gaelic via her formal schooling, which he found should be conducted in an establishment offering only English.

My former partner testified that he is not willing or able to support our daughter’s Gaelic learning. I am not a teacher, let alone a Gaelic teacher, and was not taught Gaelic literacy to any significant degree in my own schooling. The Sheriff’s own judgement perhaps recognises this in stating that I “may attempt to teach [her] to read and write Gaelic’ (italics my own).

A key issue in the case was that the Sheriff found that my daughter is ‘fluent for her age’ in Gaelic. This is not the case; a fluent Gaelic-speaking witness testified in court that she understands but cannot speak the language.

The advice of a child advocate was that this and other matters constituted errors in fact and law. On this basis I proceeded to appeal.

The appeal found that the Sherrif was correct to find that my daughter is fluent.

My daughter is not fluent. The dreadful irony of the scenario is that my evidence and that of other Gaelic speakers as regards her fluency, has been weighted below the impressions of those who cannot speak a word of the language and have never met her.

My former partner won again on appeal. He was in receipt of full legal aid but asked the court to rule that I should meet his legal fees, i.e. to reimburse these to the state.

To meet my own expenses I have already remortgaged the home where I live with my three dependent children, taken out multiple loans and begged and borrowed from friends and family. My costs have been in the region of £40,000. The Appeal Court ruled that I should also be liable for my former partner’s costs. These are £17,000 - higher than my own appeal costs through the generosity of my lawyers who gave of their time in part pro bono as both believed in my child’s rights. For the avoidance of doubt, my former partner was not liable for these costs - he was in receipt of full legal aid. Nevertheless he chose to ask the court to pursue me for these costs.

In addition to costs incurred, I am required to adjust my working pattern significantly in order to transport my child to and from my former partner’s preferred school which is near his home, from which he works freelance, but not near my home or place of employment. This will affect my income, which is already compromised as I have a disability. Ironically the Gaelic education for which I fought had free transport to and from the parental home(s). I am required to meet transport costs for my daughter to attend school when she is with me.

The greatest impact of this decision is obviously the emotional devastation it has caused; as a mother, to be denied the ability to pass on your child’s birthright is painful to the extent that it is impossible to describe. To look her in the eye, and tell her she won’t be going into the same class as her best friend, the school she’s been familiar with since birth, and that there’s nothing I can do to change that, is one of the hardest things I’ve ever had to do. She was deeply distressed and misses her friends significantly.

I am still absolutely crushed by the events of the past year, and it will take a long time for my mental health to fully recover, but the financial impact has added an additional, almost unbearable pressure to that, making an impossible situation still worse.

Therefore, I’m asking for your support in meeting some of the costs incurred in my attempts to defend minority and indigenous language rights, Gaelic language rights, mother tongue rights and my daughter’s human rights.

Despite legislation to protect all of the above, I have discovered that no real protection exists for me and my daughter. I am facing the very real prospect that she will be the first in my family unable to converse in Gaelic. I will continue to speak Gaelic to her, and do everything I can to ensure she is fluent, but with a 50/50 shared care arrangement, and a father who actively refuses to engage with her Gaelic learning, this will be extremely hard.

This has been an incredibly difficult year, and while it has affected me and my family on a personal level, I was aware in fighting for my daughter’s rights that there are wider repercussions around support for Gaelic and other minority languages. More understanding is required, more tolerance and respect, and in my opinion more legislation to protect children’s right to an education in their own language (especially if that education is readily and freely available). Anything you can spare would mean the world to me. I’m hoping to find 6000 people who can donate £10.