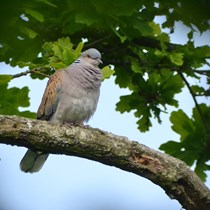 At a time when our natural world is under greater threat than ever before, it is essential we take a proactive approach to nature conservation. Rewilding can play a key role in restoring wildlife and the systems on which all species – including our own - depend.

This Just Giving Account has been established to receive funds generously donated by our supporters which will further the aims of the pioneering Knepp rewilding project and rewilding in general.

The aims of the Knepp Wildland Project are:

1. The reintroduction and reinforcement of species missing from our landscape, such as beavers and white storks. This involves:

a. monitoring the beavers released into the rewilding project at Knepp and recording their effect on habitat and other species

b. monitoring the white stork breeding colony based at Knepp

c. tagging white storks with satellite transmitters to follow their migrations to Europe and Africa

g. providing ongoing advice and support for other stork reintroduction sites in the UK

h. maintaining links along the white stork flyway to Africa.

3. Extending habitat restoration work to parts of the estate currently outside the rewilding project, including fencing to protect valuable habitats, and creation of additional wetland habitats

4. Instigating new nature recovery projects elsewhere in the UK, including through land purchase for rewilding

5. Community outreach, including providing experience in nature conservation for young people at Knepp

6. Contributing to the national nature conservation debate, including participation in think tanks and lobby groups, and conducting workshops and conferences at Knepp

Thank you for helping to make our world a wilder place.

Knepp is a 3,500-acre estate in West Sussex. Since 2001, the land has been devoted to a pioneering rewilding project. Using grazing animals as the drivers of habitat creation, and with the restoration of watercourses, the project has seen extraordinary increases in wildlife.