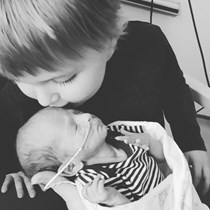 Weʼve raised £4,294 to Kolbysfootprints aim to help give comfort to berveaded parents who have to experience the unbearable loss of a baby just like we have. 💙

Our beautiful baby boy Kolby fell asleep in our arms after a short sixteen days on this earth. He was so wanted and so loved by many, espically his big brother Kody (who's approaching four years old)

Kolby was doing so well after spending his time since birth on the neonatal unit, unexpectedly and heartbreakingly Kolby took a bad turn, and we ended up traveling to Addenbrookes in cambridge where two days later he grew his wings.

We never thought it would happen to us, and was oblivious to how common the loss of a baby is, whether this is by miscarriage/stillbirth/neonatal death. 1 in 4 experience this!

As parents who have experienced the loss of a child we have decided to set up Kolby's footprints in his memory and are hoping to raise money to give comfort to other parents who sadly go through this.

We aim to provide hospitals with memory boxes to be given to parents at the time of saying goodbye, in these boxes will include keepsakes for parents of their baby such as teddies, candles, hand and foot print kits and much more.

Through Kolbys footprints we also aim to do other amazing things around this which might help a family at their most vunerable time.

Just now Thank you everyone who's donated Please follow KOLBYSFOOTPRINTS on facebook or instagram to follow our joruney. The total amount raised cannot be amended on here so the amount shown is from just giving donations only.