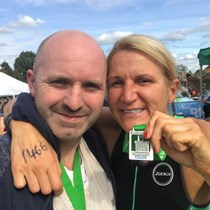 On 22nd of March 2107 a lot of people’s lives changed, I won't talk too much about the why's and how's as that is not what this page is about. This page is a story of the human spirit of survival. Many people were injured and sadly a number died. This is only one strand of many fighters, some who fight a physical battle that all can see and others who fight an unseen psychological battle that is easily hidden away.

The reason for me writing this is a man who in the small sphere that I had dealings with him was the at the centre of all the fun and positive things in the office. You don't always appreciate the small, everyday details until they have gone, and none more so than Kris Aves.

I walked into the office on the 23rd of March not knowing what had happened to Kris but soon figured something was not right. Through the tears of colleagues I was told the news that Kris had been seriously injured at Westminster Bridge.

I was shown a photo of him lying on the floor with his blood literally running in the gutter and some obvious leg injuries. Imagine being hit by a 4x4 from behind doing 70 mph. He really is lucky to be alive. Now imagine being thrown into that situation with no choice to just walk on past, as many were seen doing. Without the help of those who didn’t have to stop, Kris and many other would have suffered more and this page may have been very different.

As things turned out the office had hope that Kris would be ok. A couple of months passed with various rumours floating around about his health, when I was lucky to be in the office when Kris called. The boss had him on speaker phone as everyone gathered around. He sounded exactly like himself and this is my inspiration moment.

He apologised for not calling earlier and explained he had been to hell and back. He detailed all of his injuries which were sickening and then compounded this by revealing that he was also paralysed... that was a moment when some broke down to tears.

That took some time to absorb but what I recall of the phone call was how positive he remained. That moment really was and still is an inspiration to me, to appreciate life and your health for every minute of every day. His positive attitude in the face of such challenges put my own problems to shame.

I decided I needed to do something positive, to at least contribute a small amount to the future challenges that Kris with his wife and kids will face.

I was slightly overweight and signed up myself (with the wife - Basia Kolosinska) for a triathlon - Hever Castle on the 23rd of September 2017. I've done one before when I was 20 and struggled with the swimming. I ended up doing backstroke and it was in a swimming pool. My goal is to finish and maybe raise a few quid to help Kris.

Triathlons are now swam in open water and I continue to struggle with this. I have a marginal fear of water compounded by irrational fears of weeds and underwater living things that cannot be seen but sometimes felt.

I have done some training in running, cycling and indoor swimming but each time I go to do a lake swim and stand by the muddy edge, I ask myself, what the hell am I doing? I then think of Kris and his twice daily routine of having a catheter 'poked down his Jap's eye' and think this lake ain't so bad.

I will just be pleased to finish this 400m swim and then its downhill from there.

I've pushed my comfort zones by choice, on behalf of another, who had no choice and who is in permanent discomfort and regular acute pain.

I ask you in return that you take away this very human spirit of survival that Kirs has shown and count your blessings that you take for granted every day.

Hopefully you have been inspired to contribute towards a very achievable monetary goal and receive with thanks anything that you can spare to make his return home some 6 months later slightly more bearable.