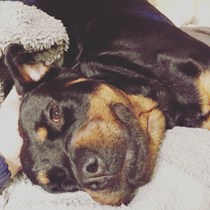 On Thursday Shadow was sick around 8 hours after she had eaten, Her food hadn't digested so we decided we should take her into the vets to be safe. She was given a Anti sickness Injection and we was told that if she vomited through the injection to take her back. About 3 hours later she was sick and it has streaks of red blood in it, So we went back in and they decided to keep her in over night to stop the vomiting and keep her hydrated. She was diagnosed with gastroenteritis. Which has triggered other problems and cant be cured because of said problems.

That was on Thursday night and she's still there, Since then she has had a xray, and ultrasound a operation to check for obstruction, 3 lots of blood tests , and endoscopy and countless bags of fluid to keep her hydrated becuase she can't eat.
They then did a CT scan and found out she has a weird shaped liver which has caused her stomach to grow in a odd place, meaning that when she got the gastro and her tummy swelled it was being irritated by the odd placement, Without this operation which should normally be done in three parts , but becuase of the severity of her health they are doing it all at once. she will Die.
Shadow Is only 2 she's 3 on the 19th of Jan, She's still just a baby! and she's the kindest most gentle dog I have ever owned, she doesn't have a bad bone in her body and I will do anything to fight for her, Even if it means begging strangers for money to help top up her insurance.
Since she has been ill our other dog Odin caught gastro too. meaning we had to spend the last of our money on medication for him.
Shadows bill is currently at £9,800

as you can see we have upped the total. That in no way is us being ungrateful for EVERYTHING you have all done for us. it is just because her operation now has further complications. she now has to have a feeding tube put directly into her intestines as she hasn't had any food