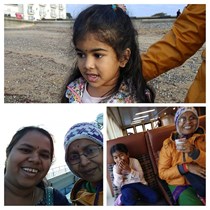 Weʼve raised £805 to Help 10 years old Akshaya fighting against bone cancer. she had to get treatment that involves chemo-therapies and radiation.

Akshaya, a 10 year old girl was pretty active from initial days and started suffering from severe leg pain from about 10 months. It was initially thought as a usual pain, however, it was declared as a stage 2/3 bone cancer after going through multiple tests in various hospitals.

As a result of it, she had to stop her schooling and go through the treatments, which involves 8 stages of chemo-therapies and radiation. A surgery would be required based on medical condition of Akshaya after completing the chemotherapy treatment.

Doctors from KIMS Hyderabad India have estimated the cost for the remaining chemo therapies and radiation as 5k and it would require more in case if a surgery is required based on chemotherapy results.

In a situation where treatment cannot be progressed, bone cancer could potentially spread across the body and it could worsen the situation.

I would request everyone to join the hands and save Akshaya fight against the bone cancer and help her continue her schooling.

Save Akshaya - Every penny counts to her treatment. Akshaya has to go through the treatments, which involves chemo-therapies and radiation. A surgery would be required based on medical condition of Akshaya after completing the chemotherapy treatment.