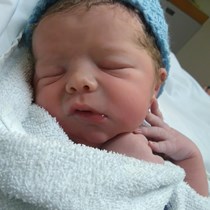 Weʼve raised £1,293 to for intensive care equipment at Alder Hey in honour of 'My Leo lion 🦁🌻❤

Our story is about our baby boy Leo Daniel Fish, who we like to call Leo Lion because of his amazing strength and bravery.

Leo had an undiagnosed heart condition at birth, I took Leo to the doctors after 15 days at home because he was not feeding too well and something didn't seem right.

Here the doctor sent me to Wrexham paediatric ward with a suspected viral infection, bronchitis with suspected sepsis.

After a chest x-ray was done, they fund there was a problem with his heart, from here we were rushed by ambulance to the specialist cardiac unit at Alder Hey

Leo was found to have a Hyperplastic aortic coarctation a large VSD and an ASD.

Here over a course of 11 weeks 2 days Leo had 2 open heart surgeries to repair his aortic coarctation and to temporarily fix  a  large  VSD  by  putting  a  band  around  the  pulmonary  artery  to  restrict  blood   flow  until  the  hole  hopefully  closes  as  he  grew.

After  4  days  on  the ward Leo was unsettled and withdrawing  from  all  his  medication which was normal  but not nice so I stayed with him,   changing  his  nappy in the night and putting his projector on  and  generally  loving  spending  time  with each other.

I will make sure Leo's fight  and  bravery will always be known about, as we am proud beyond words

Leo  was  loved  and  known by everyone at Alder Hey and was so popular.

He was and is always perfect to us

Thanks so much to everyone