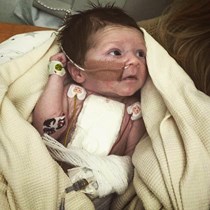 With awareness comes funding. With funding comes more research, more effective medicine, less invasive surgery and more training. We’re raising money for the Cardiac Ward in Bristol Children’s Hospital so we can donate towards anything they deem appropriate that can help them continue to do the amazing work they are doing as just saying thank you doesn’t seem enough.

Leo Douglas-Grayson was born on November 6th 2017. The next day he was diagnosed with 4 heart conditions. 1 of them requiring life saving Surgery. He was rushed to intensive care at st Michaels Hospital and put on a medication which would help blood flow to the bottom of his body. 6 days later he was then moved to the High Dependency Unit in Bristol Children’s Hospitals Cardiac Ward and when he was 7 days old - on his due date - had open heart surgery. Leo's wound then got infected twice requiring 2 further operations.

Leo stayed in hospital for the first 9 weeks of his life. Alex and I staying by his side everyday. Leo had multipe x-rays, ECG’s, Echo’s, and general aneasthetics. Leo was pricked so much for cannulas, blood and long lines that he began to hate being touched. His heels were completely covered in dots from where he had so many heel pricks. Eventually, myself and alex placed a note on Leo’s file to say that enough was enough, and that we no longer concented to anyone inserting a cannula, longline or picc line into him whilst he was awake.

Without the support of the surgeons, doctors, and nurses from ward 32 Leo wouldn‘t even be here today. They not only cared for our son, but for ourselves as well. The ward is so welcoming. I was so emotional for so long during leo’s journey, and also suffered mastitis twice which made me really unwell, resulting in being more emotional and they were so helpful and sympathetic.

We will be posting a detailed account of Leo’s journey at the end of Febuary for anyone that Is interested. This will also include more information about his heart conditions.

We are raising money for the ward that saved Leo's life because simply only saying thank you doesn't seem enough. Any money we now raise, after £500 will be donated to the Cots for Tots charity house we stayed in, when leo was in intensive care. It is opposite the hospital and enabled us to be close to leo still rather than having to go home as you are unable to be in the intensive care unit to sleep. This house keeps family close by and also saves families money so they don’t have to stay in hotels when already taking unpaid time off of work.

With awareness comes funding. With funding comes more research, more effective medicine, less invasive surgery and more training. We’re raising money for the Cardiac Ward in Bristol Children’s Hospital so we can donate towards anything they deem appropriate that can help them