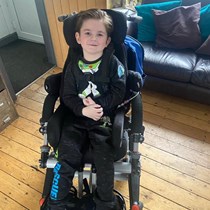 Weʼve raised £3,935 to help a real Superman, by completing the Ironman (for Hugo Orrell).

On the 4th July I will be competing in the Ironman in Bolton. This is going to be a huge challenge, but nothing in comparison to what Hugo has overcome. Hugo is one of my closest friends' son, please read on for his story. I'd be really grateful for any support to help me through the 3.9km swim, 180.2km bike ride and finally a marathon. Funds will go directly to Hugo and family to help in any way needed. Thank you in advance for your support.

Hugo is a beautiful 4-year-old boy. Hugo, his mum and his sister went on holiday to visit their family in Spain. Unfortunately less than one week into the holiday on the 22nd July Hugo was rushed into hospital suffering from seizures, this was his first ever episode and he has always been a perfectly healthy little boy.

Once at the hospital, the medical team managed to stabilise Hugo and a CT scan was performed, the scan did not pick up any problems with his brain. He was sedated and put on a ventilator as he was in a critical state and was unable to breathe on his own.

Once Hugo was stabilised, the doctors arranged for him to be transferred to a hospital with a Paediatric Intensive Care Unit, better equipped to help him. Sadly, during the process for his transfer, the team had failed to ensure that Hugo was being ventilated, which caused him to go into Cardiac Arrest, and needed to be resuscitated. Due to the lack of oxygen to the brain, Hugo has been left with severe brain damage.

The part of his brain which has been most affected is the Basal Ganglia which is responsible primarily for speech, movement and posture.

Hugo was transferred to MRI children's hospital via air ambulance where he spent several month's receiving treatment and rehabilitation. Hugo is now home with his family where he belongs. He has a long road ahead, which is why I'd like to raise funds to support Hugo and family in any way possible.

Thank you so much for reading, and thank you for your support.
Leon