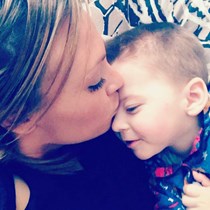 Jack is a 3 year old boy who was born with a very rare incurable condition called Non Ketotic Hyperglycinemia (NKH) which is a genetic metabolic condition.
Jack would have up to 60 seizures a day which now are some what under control with a cocktail of medicines.
Not only does jack have to battle with seizures he also suffers with global development delay because of his condition signals are not transmitted around the brain as they should which affects jack sitting, he's unable to crawl, walk, talk and it even affects jacks ability to play feed and even see, despite this, there is hope for my brave son, there is a life changing treatment called the Quantum Reflex Integration Cold Laser Therapy which had been proven to have outstanding results in other children with NKH
This treatment could help jack with his development and sleeping issues that he's been having as he gets older,
We need to raise £5000 to be able to purchase the laser which could change a very brave little boys life