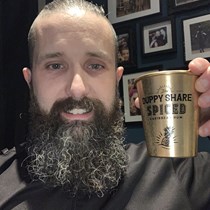 Weʼve raised £5,930 to Help those affected by Breast Cancer

So my "Man Bun" has become a distinctive feature of me and my life. Having appeared on UKTV's series CopsUK Bodycam Squad whilst policing in Uttoxeter my "Man Bun" gained its own notoriety and status dividing opinion amongst those that saw the show and making me identifiable across the United Kingdom and afar. Having taken seven years of love, care, conditioning and combing and now that Boris has lifted the restrictions on Personal Care it is time for the "Man Bun" to go.

So I have decided that on Saturday 22nd May 2021 (COVID Permitting) the "Man Bun" goes and for those curious the beard isn't going I can't risk looking 12 again.

I have contacted my three friends who have recently been affected by Breast Cancer and asked each of them to name a charity that they would like any monies raised donated to. So the three Charities chosen are below, if you click the blue name of the charity you can find out more about the Charity.

Katharine House, Stafford - Provide Free Care to those affected by life-limited conditions, not restricted to Cancer but also catering for a whole range of conditions and illnesses. Their care is not exclusive to the patient but also focuses on supporting the family and friends. They are a charity and rely solely on acts of kindness and generosity to provide this valuable support.

StrongMen - The aim of this Charity is to help men tackle the mental, emotional and physical health conditions brought about by bereavement. It is often an oversight of the secondary effect of Breast Cancer on the partner of the Patient. They have personal experience in these issues which helps them to support Men going through the toughest of times.

Mummy's Star - This is the only Charity in the UK and Ireland dedicated to women and their families diagnosed with cancer during pregnancy or within 12 months of giving birth.. Their mission is simple - to provide cancer support to every family facing this traumatic situation.

Due to naming three Charities I cannot list them individually so I am going to collect the money in one pot then whatever is raised will be split into three and shared equally between the Charities.

Please dig deep people and donate what you can to help these three amazing Charities who do so much to help others.