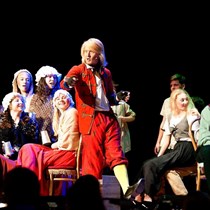 This event has been created to raise funds and show support for our cherished Lighthouse, Poole Centre for the Arts.

During lockdown Helen was contacted by a past pupil who had recently graduated from a Music Conservatoire. She was so worried about the plight of arts venues, artists and employees and asked if Parkstone and Poole Grammar School could do anything to support our own Lighthouse. We shared the idea on social media and the idea has taken flight. We have many of our alumni now working in theatre, music and dance or currently training. They all wanted to support the Arts Centre that had supported and inspired them in so many ways as they grew up. News spread to friends and the programme has grown and grown.

Whilst the government grant scheme of £1.57 billion arts recovery is an incredible life raft, it is unlikely to stem a ‘tide of redunancies’ in over 800 large venues currently applying for the funding. Many large venues such as The Southbank and Birmingham Rep have already announced large scale job losses as they restructure and secure the future of their arts and culture provision. Live music, theatre and dance may not be possible until 2021. Many casual staff and freelancers are already out of work across the country. The loss of The Nuffield Theatre is so saddening and an alarm bell for the precarious state our own Lighthouse is in. 721 events have already been cancelled, rescheduled or postponed with huge losses already accrued.

In good times creative industries combined contribute over £1 billion and account for nearly 6% of the UK economy, employing over 2 million people (based on 2017 figures). In hard times over the last few months we have looked to arts, music and culture more than ever to entertain, distract, inspire and cheer us.

Opened in 1978, Lighthouse was conceived as a receiving venue with the vision of injecting cultural provision into Dorset and providing a new home for Bournemouth Symphony Orchestra (BSO). We are the centre of excellence for live performance, film and visual art in the South West, providing a dynamic, world-class cultural facility for Poole, Dorset and beyond.

Lighthouse is unique in that we are the only multi-space venue with four auditoria in the South West, and one of the largest outside London. We house a symphonic concert hall, mid-scale theatre, small-scale studio theatre, independent cinema, art galleries, and function room spaces. Our audiences can discover and enjoy an extraordinary mix of art forms, not possible elsewhere across the South West, all under one roof.