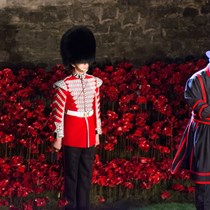 The centenary of the end of WWI will be marked with pomp and splendour, medals, swords, uniforms and speeches. Dignitaries will try, as will everybody else, to understand why such carnage was allowed to happen.

Here, in Bethnal Green, in the corner of St Peters’ Church are boards, including some from St Thomas’ Church (demolished) carrying the names of the 168 men of the locale who perished in that conflict and until recently all that we had was that, their names. In 2014 a volunteer at the church became intrigued enough to attempt to find out what she could about these men. That volunteer, Phillipa Atkinson, has uncovered the biographies of 125 of them. Some of the information is fragmentary, some more fulsome, but universally the men had all lived within a five-minute walk of the church.

None were commissioned officers, none went to Sandhurst, none were professional soldiers, all died for their country. They worked in a range of professions that existed at the bottom of society at the time. Wood carvers, umbrella stick makers, errand boys, labourers, carmen, hamper liners and a host of professions lost to us today. They died in the slaughterhouses of Belgium and France, in Turkey, in Jerusalem, in Basra and on ships torpedoed and sunk in the North Sea.

After the war this area was plummeted back into a level of poverty people hoped had been left behind in the nineteenth century. The men who survived were injured, missing limbs, or gassed so they could hardly breathe. Many were shell shocked and broken. Women bore the brunt of survival for their dependants and speaking as someone whose grandmother was one of those women, the scars of that were carried until their dying days. I remember her showing me my grandfathers’ medal and saying, “What good was that, we couldn’t eat it.”

We have always had a strong community here, and it is the community of the 21st century, both old and new, who wishes to take these lives from the shadows of the church and erect a public memorial to them. Having the biographies is an amazing gift, they make sad and salutary reading, but they also bring the area alive to that past in a way it is difficult to describe. We will be producing a book containing all of the information that we have, and have a web presence where we shall seek to find further information. We are all volunteers and if we raise any money in excess of what is needed it will go to the charity Help For Heroes. All donations of £10 or more will be acknowledged in the final print run of the book in time for Remembrance Sunday 2018.

They were ordinary men, leading ordinary lives, let’s not forget them

Local author and community activist working in collaboration with other volunteers and the Adam Atkinson the priest of St Peters' Church Bethnal Green.