Weʼve raised £1,580 to help set up a community team to speed up the diagnosis of dietary allergies.

Lydia was born on 2nd November 2017 by a planned c-section. It was perfect, we had Disney’s greatest hits playing in the background and she was born to ‘A Whole New World’ from Aladdin. She weighed in at 9lbs 15oz - a big baby (although, still not a patch on her brother!)

Since birth, Lydia had never drank an adequate amount of milk, and she got very frustrated when I tried to breastfeed her so I opted to bottle feed her instead so I could keep an eye on how much she was having. Given that she was a big baby, she should have been having a lot more than she was taking. I called 111 for some advice and due to her noisy breathing, the call handler sent paramedics. Lydia‘s heart and breathing rates were very high, so when she was just 9 days old, we went back to hospital. By this point, Lydia was dehydrated and needed milk. The neonatal team at Basingstoke Hospital fitted her with an NG tube (naso gastric) which allowed the nurses to feed her directly into her stomach via the tube through her nose.

As the days passed, it still wasnt clear why Lydia wasn’t able to drink for herself. It was suggested that she was possibly suffering with a cows milk intolerance and so was put on a special formula. Unfortunately, this was when she began her projectile vomiting!

Days turned into weeks and weeks turned into months of tests, appointments and different formulas to try and get to the bottom of Lydias severe reflux and inability to suck. At 3 weeks old, it was discovered that she had a hole in her heart and although fairly large, it was decided this was not a cause for her poor feeding.

We were in hospital for around 8 weeks whilst the incredible staff at Basingstoke Hospital not only looked after Lydia, but took great care of me, Ryan and Charlie. So much so that Charlie knew the names of the people who regularly looked after Lydia and he was over the moon when he was given christmas presents thanks to kind donations of gifts. He still talks about Dr Edelman, who always took the time to talk to him about hearts and being a doctor, but to be honest, I think he mostly remembers him for the chocolates he gave him a few days before Christmas!

As we were in hospital, we had the invaluable advice and support from Issie and her team of dieticians. She worked closely with Lydia’s consultant to come up with a plan to suit her weight and always pushed her boundaries to get her drinking for herself. Lydia was put on a few different formulas over a period of time and different feeding methods were adopted. For a short while, she was fed on a pump which continuously drip fed her over a 20 hour period. Sadly, not everyone has such quick access to such a vital medical team. This is where we (and you!) can help....

We feel forever indebted to everyone who looked after Lydia and we have thought long and hard about how we can ‘give back’. We‘ve decided we would like to raise funds for the hospital and they feel the money we are able to raise would be best placed to help set up a community based team to enable an earlier diagnosis of a cows milk protein allergy/ intolerance. It’s currently about 6 months before a child is seen to determine an allergy, by which point they have started weaning. The plan is to set up this team to try and see the child within a month, thus making a vast difference in their quality of life during this time. Lydia suffered greatly with reflux, which in itself can be scary, not to mention tiring with all the outfit changes. To have a child constantly being sick and unwell but no known cause would be truly worrying yet it could be something as simple as an intolerance to cows milk.

Your donations will go a long way towards purchasing equipment such as weighing scales, a laptop and a batch of recipe books to give to families, amongst other things too.

Being in the hospital for the length of time I have, I can honestly say the NHS are absolutely INCREDIBLE and any extra funds they are able to use will make a massive difference to so many people. We wanted the money to go towards a department who had helped (and continue to help) Lydia, and we’re honoured to be able to help in what ever way we can. Any surplus donations will go towards the hospital within the childrens department. 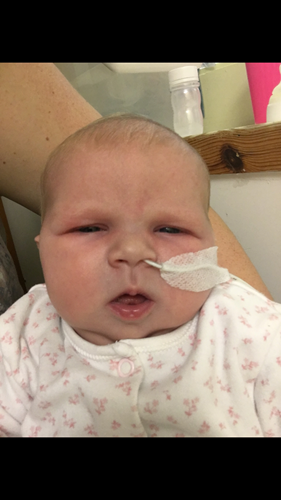 Lydia with her NG tube in. Its not until we look back at photos that we realised how poorly she looked. 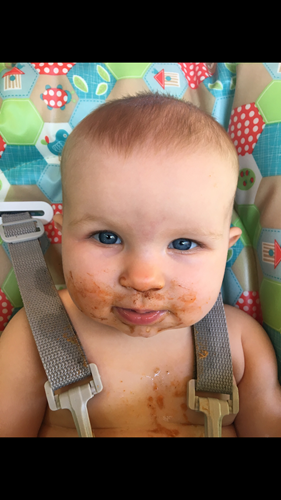 This is Lydia now, as you can see - no problems eating food! This is most definitely down to the dedication of the team at the hospital. 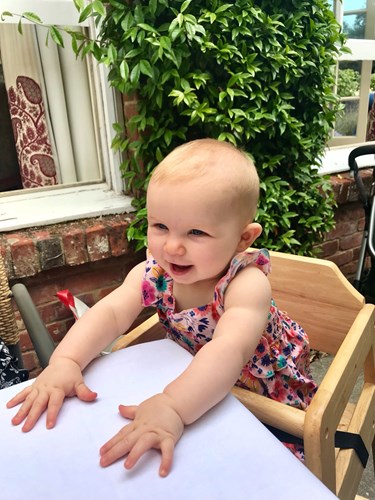 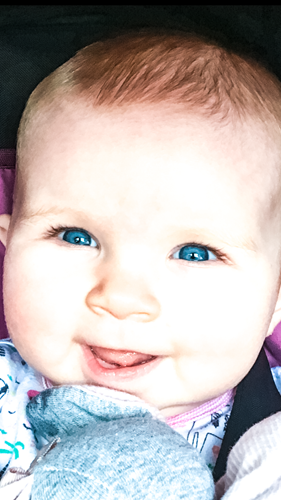