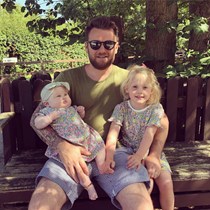 In February 2018 Mabel was born not breathing and suffered from something called hypoxic ischemic encephalopathy. The paediatric team at Blackpool worked on her as soon as she was born and made her stable enough to be transferred five hours later to Preston NICU for cooling treatment. This treatment helped to prevent any further damage to the brain by putting her in to an induced coma and hypothermia for three days. She was treated for two weeks there before being discharged home.

Since then we have been back in hospital with Mabel and she has been diagnosed with West Syndrome. When we were back in Blackpool Hospital we realised how a lot of things we came to use on a daily basis had been bought through donations and we would like to donate to both Preston & Blackpool to show our gratitude to the paediatric teams at both hospitals.

On 5th August this year we are doing a super hero walk with our very own ⚡️Super Hero Mabel⚡️ and friends to raise money for Bliss who help all premature & sick babies but also for the Preston & Blackpool Neonatal Units.