Weʼve raised £890 to Help the people in the Portuguese village Macieira to rebuild their lives after the devastating fire of October 15-16 2017.

They have lost their crops, their houses, their animals, their livelihoods. 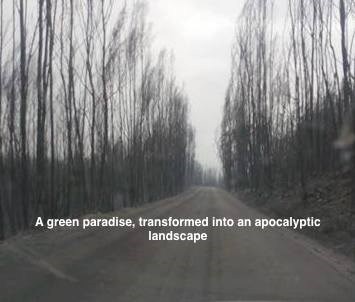 After the devastating fires in Pedrogão Grande last June, the people of Macieira and their neighbouring villages were on constant 'red alert'. Not a day would go by all summer without the sight of a plume of smoke somewhere not far away. The sounds of those tending their crops were accompanied each day by a sinfonietta of helicopters and planes - airborne firefighters, to dampen the unreachable flames of the forests. Each day, we would clamber round the television news in the Café o Fininho, incredulous as the country continued to burn, bombarded with image after image of another village, another town, and luscious landscape, burned to the ground. 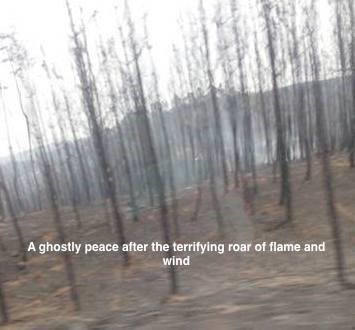 Then "quick quick - smoke - over there!" Run across the road to Maria's terrace, a good look-out point. Wet fingers in the air try to determine wind direction. Is it time to ring the church bells? Sound the alert? Gather everyone to safety ... hopefully?

So the summer is over - officially. 31st September was the last day for the fire lookouts to be employed. The extra firefighting men and women - our now exhausted bombeiros - are cut in numbers. The 'high risk' season is over - officially. And yet, still there has been little or no rain since May. Temperatures still are soaring into the 30 degrees. But the risk is officially over.

October 15th. Fire with several active fronts engulfs the area, flames fanned by unseasonably high winds - a gift from Hurricane Ophelia. But the summer, and the risk, is officially over. Help was a long time coming. Because the risk is officially over. 1st October. That's the official date. 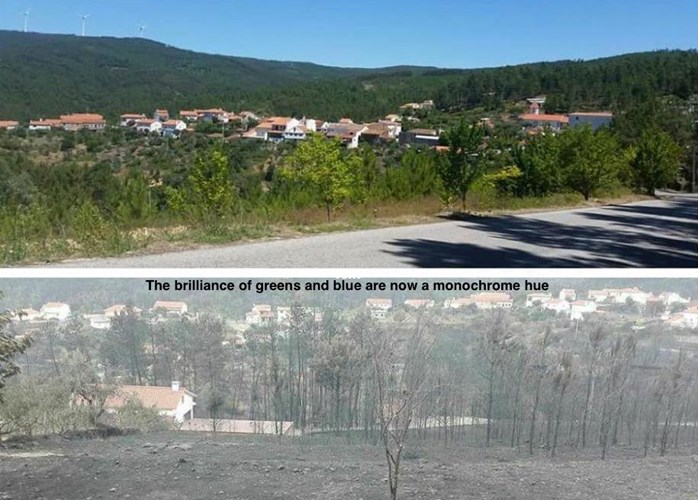 People are in shock. Some have lost their homes. Many have lost their way of living, their lands once green and fertile, now black and grey, littered with the carcasses of dead animals- livestock and wild. Some took the lives of their own goats and pigs before the burning, a kinder alternative to the terrifying approach of the inferno. People's livelihoods are gone. Not only their way of life, but the very things that provide a living.

Please donate as much as you feel you are able. We will give all proceeds to the local counselors, to distribute to those in greatest need.

Thank you. Obrigada. In Solidarity with the People of Macieira.

In 2009, my husband Nic and I discovered this beautiful community. The people of Macieira are hard-working, kind of heart, generous of soul and spirit, a caring, sharing community who welcomed us with open arms and broad smiles. We can't undo what is done, but this may help.