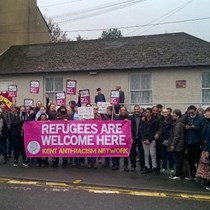 Weʼve raised £430 to support the Maidstone Mosque renovations by donating £10 each time a Britain First supporter turns up there to demonstrate.

A statement by the Maidstone Anti-Racist Network: “Following a German example we have decided to use Britain First’s presence in Maidstone against them. Each time a Britain First member comes to Maidstone to protest against the mosque, we will donate £10 towards the building of the new Maidstone Mosque.

“Eight Britain First supporters were in the town centre on Saturday before they marched to the Maidstone Mosque so we will raise £80 which we will be giving to the Imam.

“The more Britain First members that turn up, the more money we will collect through crowdfunding for the mosque. We will use their campaign against them in the most peaceful way possible.”

The Maidstone Anti-Racist Network was set up by a group of concerned residents in Maidstone, after a number of appearances from far right groups to the town to protest against the expansion of the Mosque there.